The FDA has just approved a very smart pill, that seems to have an extremely high potential of increasing the compliance of patients with all sorts of diseases to take their (oral) medication on a regular, as-prescribed basis. Also, it is extremely cool that you are able to monitor from afar whether or not that pill has been taken. Imagine Mom or Granny who has unfortunately slipped to a slightly demented stage but is still living by herself – you or the designated care giver can only go there once a day for some hours. At most. Do you really know whether it is true that she has taken her anti-dementia pill? Or all the others that she might have to take as an elderly, co-morbid person who is sliding down the slippery slope into severe memory loss? The pills aren’t in the box any more – so far, so good. But have they been swallowed or rather washed down the drain? When have they been swallowed? All this could be monitored via a mobile app – extremely helpful. 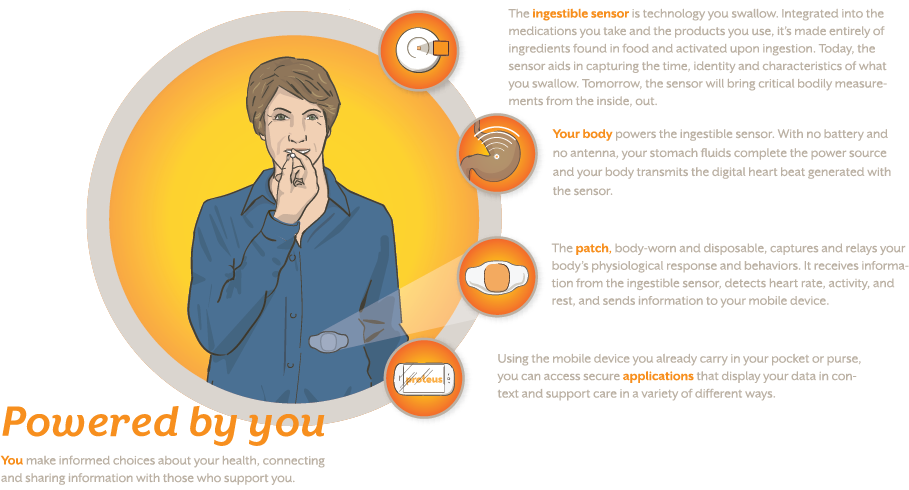 I sent this around to some friends of mine, e.g. because I know that the Alzheimer’s problem with Mom outlined above are a real-life problem for them.

And immediately I got a phone call by one of the mail recipients who is also very engaged when it comes to fair play in sports – a hot topic for years with special attention again during this period of the London Olympics. Think last Sunday, for example…

So, how can smart technology such as the Proteus pill, be used for smarter ways of fighting the dumb practice of doping? Today, the athletes are subjected to all sorts of half-hearting requirements such as reporting their whereabouts in advance (to allow for early-morning, late-night, all-times-of-day surprise controls), having their blood test results recorded in a blood pass &c.

Yes, granted, this of course would be the next step to losing even more personal space.

Do people really care today, posting every single trivial tidbid of their lives on Facebook & Co. as a constant stream of mostly meaningless information 24hrs a day anyways?
Don’t we all send our whereabouts to who-knows-whom 24/7 anyways, simply by carrying our smartphones with GPS tracking around?
Wouldn’t athletes appreciate, even, if they would get rid of the hassle of reporting their plans of where they will be when?