Weather was not really permitting (less than 30°F, foggy and windy), but it was actually so miserable that another day spent inside would have had negative effects on the psyche. So, the cure was in the outdoors, in riding my bike and going for another history hunt that I went on in that once-Roman-inhabited area I recently moved to.

And an educative ride it was:
First, and lastly and in between I learned that I shouldn’t even attempt to attack any mud-covered uphills of a certain steepness…

Furthermore, though, I passed by the remnants of 15th century kilns that were used for glass smelting. Today, you need a bit of imagination to picture the central main kiln and the four accessory ones that must have looked like giant bee hives some 600 years ago. 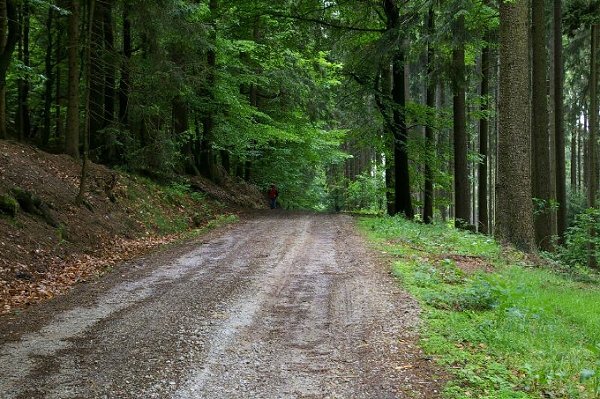 Even then, though, there were located in the midst of woods which does strike as being a bit odd. As a matter of fact, the green glass that was smelted there (and in other such places) was called „Waldglas“ in German, which means „Forest Glass“ or „Wood Glass“. And actually the translation to English makes it clear:

To make glass, you need to lower the melting temperature of quartz to something like 2,000°F (yes, if you reach that temperature, you have successfully lowered the melting temperature). Partly, this can be achieved by the highly sophisticated physical characteristics of the kiln (that medieval folks potentially did not understand by scientific terms but knew how to build after decades of trial and error). But the other main aspect is that ashes from trees (especially from beeches) is used since they hold significant amounts of sodium carbonate and potassium carbonate mandatory for the production of sufficiently hard and resistant glass. 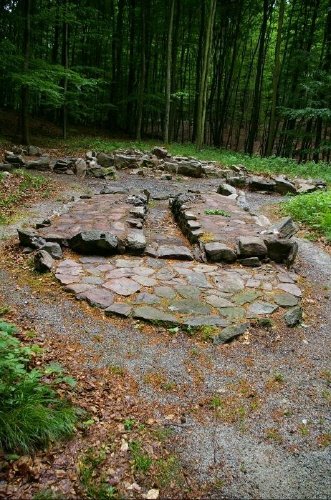 The tree trunks hold somewhat of an equilibrium of sodium and potassium; however, in since in birch the amount of sodium significantly exceeds that of potassium, their ashes are less acceptable when it comes to their utility and producing high-quality glass. Consequently, with time, people tended to exclusively ash the tree trunks and did almost exclusively so in late medieval times when the kilns I stumbled across today were built.

Now consider this:
– For the production of 1kg of glass you need about 200 – 250kg of beech wood
– In the 15th century, mainly (if not exclusively) the tree trunks were used for glass production
– A beech trunk of 5m of length and 0.5m of diameter has a volume of 1 cubic meter and weighs about 0.7 tons. That’s enough for the production of about 3.5kg of glass.
– Scientists have calculated that in those times, 1 sqare km of beech woods equaled about 22,500 tons of wood.
– The glass kilns could produce about 35kg of glass annually. So, they went through 7 tons of wood each year.

And there you have the explanation why they were located in the midst of such woods: to minimize transport (and cost and labor associated with it). After 20 – 40 years they had to be re-built in a different place anyways because all the trees in reasonable vincinity would be felled by then. (And for the German-speaking blog followers: There you have your explanation for the origin of the near-by town of „Glashütten“ *)

In other words: We should not raise an eye brow that only a few stones are still visible today; but let’s count ourselves lucky that after so short an activity of the glass manufacture so long back in history there are still some remnants to be found. And that the trees have successfully re-grown, again taking control of the area that they were chopped off from way back when.

*which translates to „glass smeltery“ or „glass kilns“

Unfortunately, I forgot to bring a camera, so I „borrowed“ the pictures here from the web site of the close-by town of Kroeftel where you can find some more impressions of the place in the woods…