Today’s greetings are not only from Germany, but are really (and finally again, after a loong time) coming from the homeland of the author, the Northern-most federal state of Schleswig-Holstein. It’s not only a really wonderful (and sometimes quite challenging) biking area — never underestimate the head-winds —; it also has a lot to offer in terms of culture and nature, not clashing, but often displaying a very nicely and smoothly interwoven pattern.

A beautiful and interesting exemplification is, e.g., the monastery of Nütschau which is embedded into the thickest of woods and lush forests. You glide swiftly over the rolling hills of the area’s frontal moraine … and, without „warning“, find yourself in front of the pretty impressive main building of the monastery.

Main building of the Benedictine monastery in Nütschau

Go further North, and there won’t be another such monastery of Benedictines on German grounds.
Or rest right there – it’s cozy and inviting enough.

Cozy enough for a stop: The historical "Schloßkate" is the home of the monastery's caretaker these days.

This coziness, however, has only come as of lately, when the building actually became a monastery some 60 years ago. Some 1,200 years ago, though, the foundation to the place was laid – as a Carolingian defense wall or rampart, plus associated military buildings, built by the Saxonians of the West against the Slavs of the East. This wall is known by the name of „Limes Saxoniae“ – and, therefore, it somehow connects my old Northern homelands of Schleswig-Holstein in a historical manner with the Roman Limes (which is even some 800 years older) in the area I currently reside.

However, coziness of Northern buildings is not an accomplishment of the last century or so. When riding through those little villages and rural areas up there, you will find a lot of coziness in older buildings, too — but mind the streets when biking, they may date back a little as well: 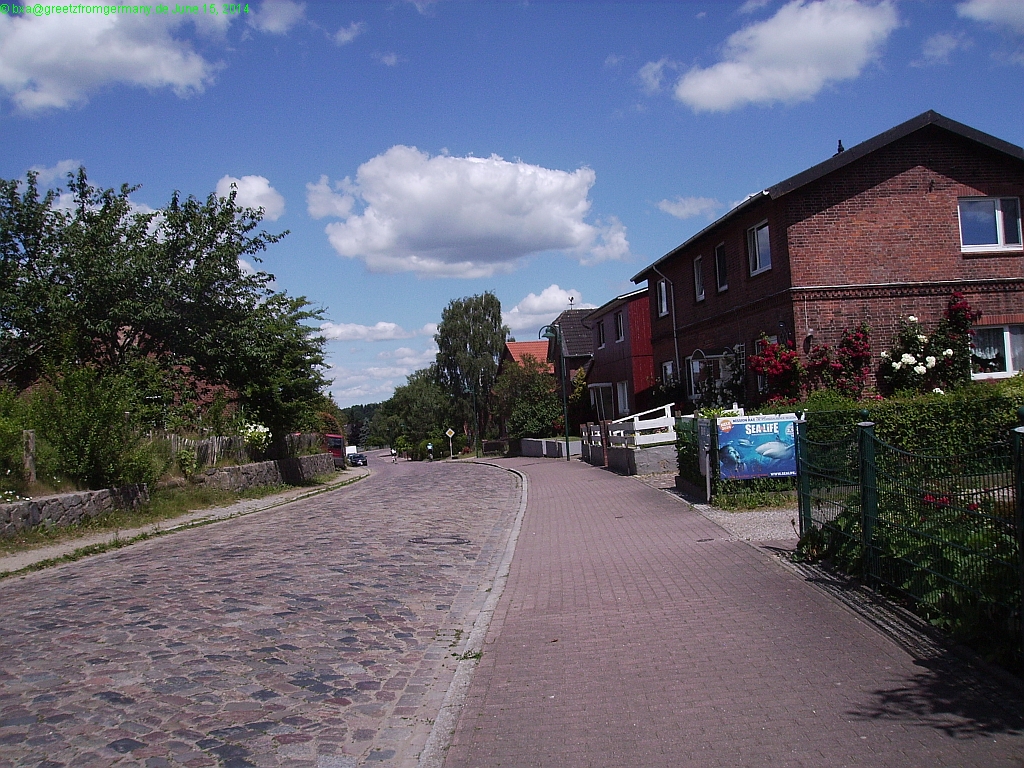 Profane coziness - and streets that are nice only to non-bikers

Sizeable buildings are also found in rather nondescript little settlements – and on a day like today it feels a little like riding through a Northern version of Tuscany: 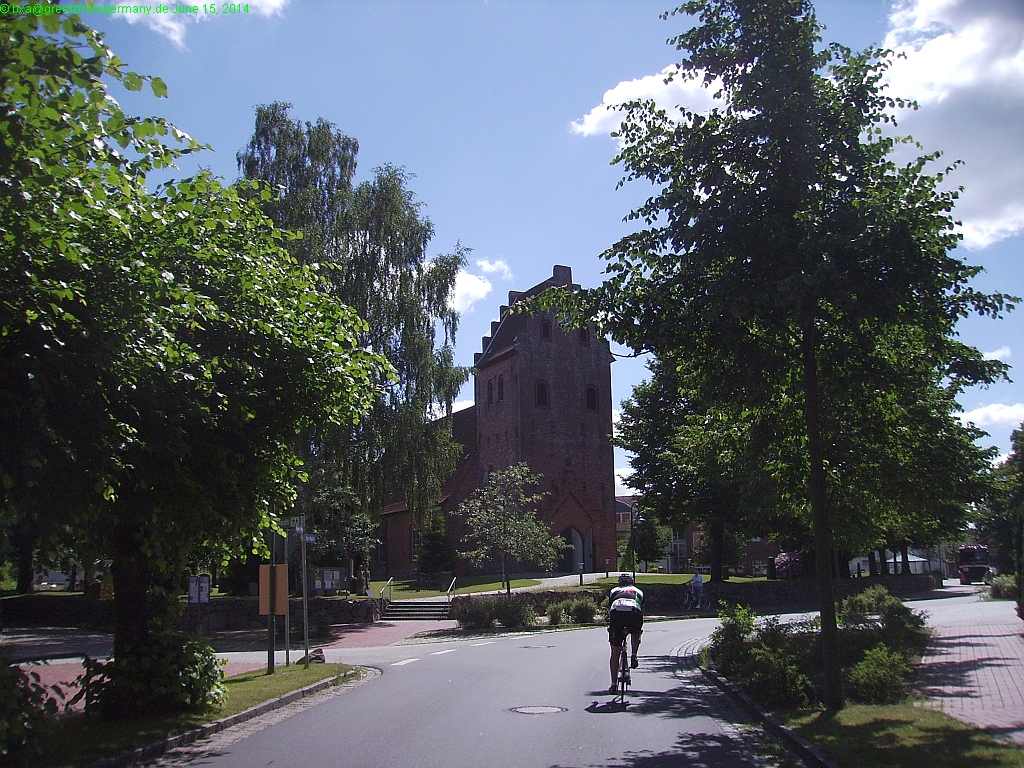 And when you leave the settlements again – which is always after minutes only – you have an even better view of the majesty of the skies and clouds of the North, … 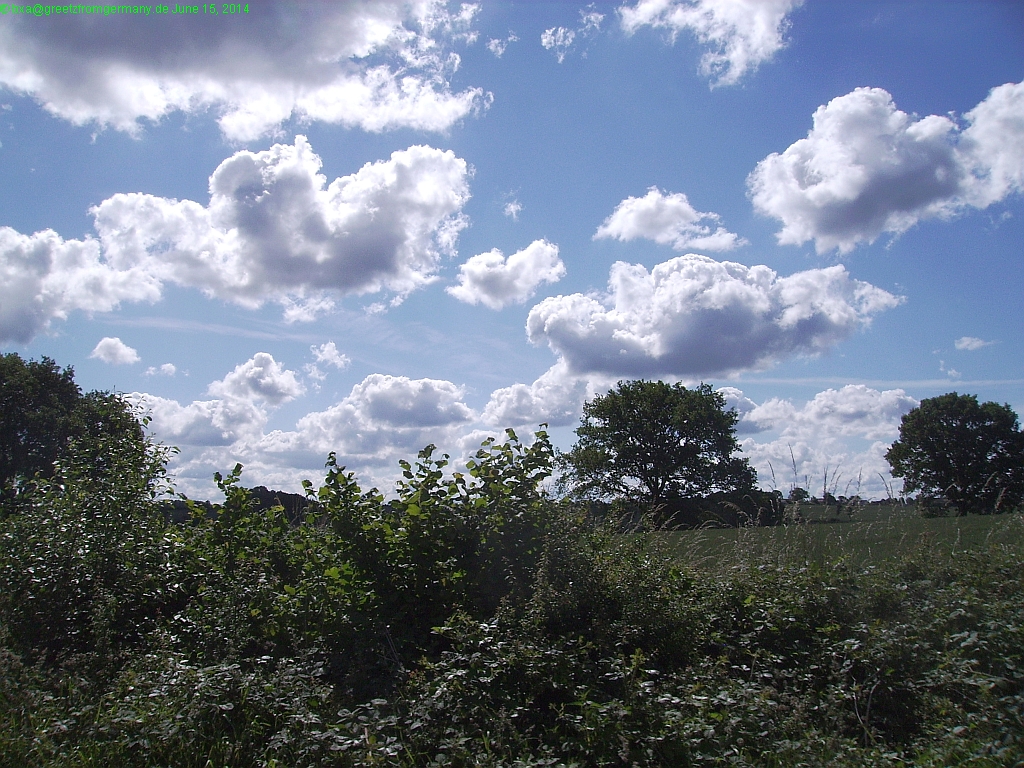 Not only the buildings are pretty massive in the North

…a worthy match of the majesty of culture and architecture up here: 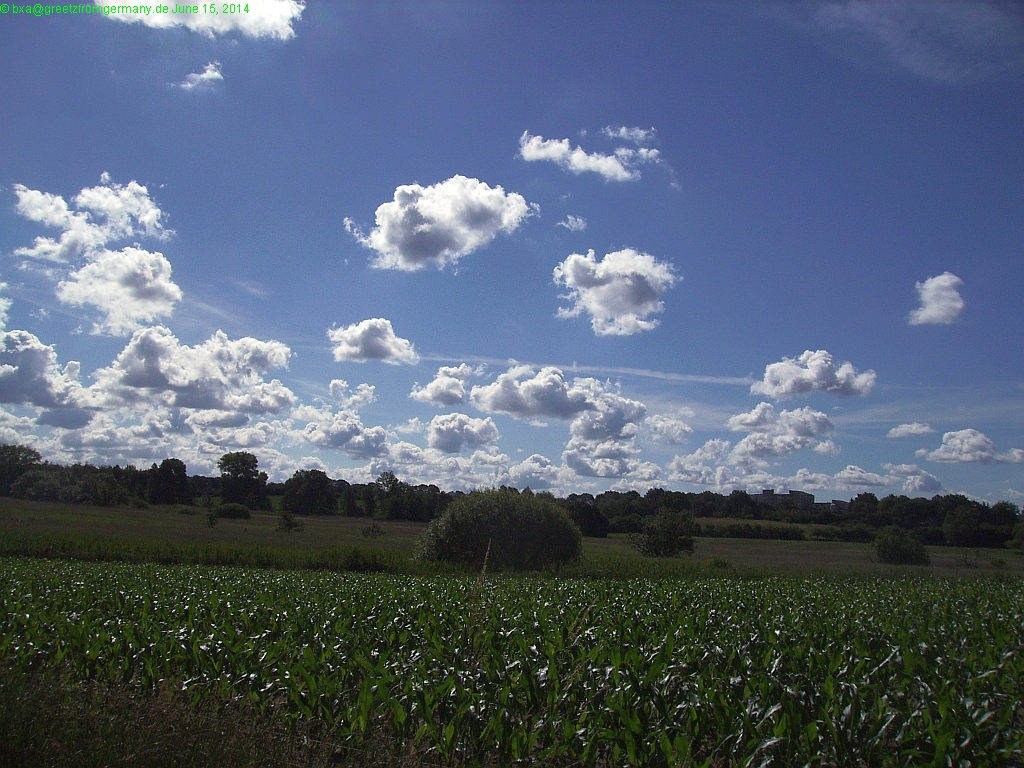 Only when it comes to the bikers around, apparently a little less can be expected in terms of civilized behavior and grandeur – then again, such signs are *sigh* probably quite in order anywhere you have a bunch of bikers coming through, unfortunately: 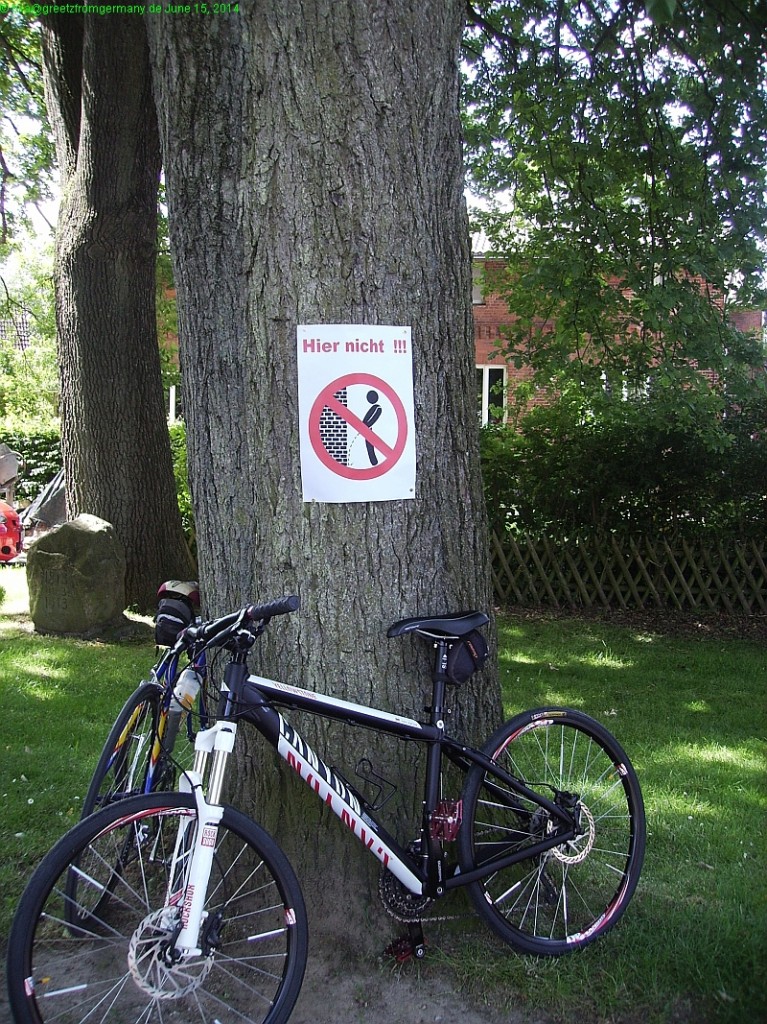 What may be a bit of a difference to other biking events is the apparent taste in energy food: 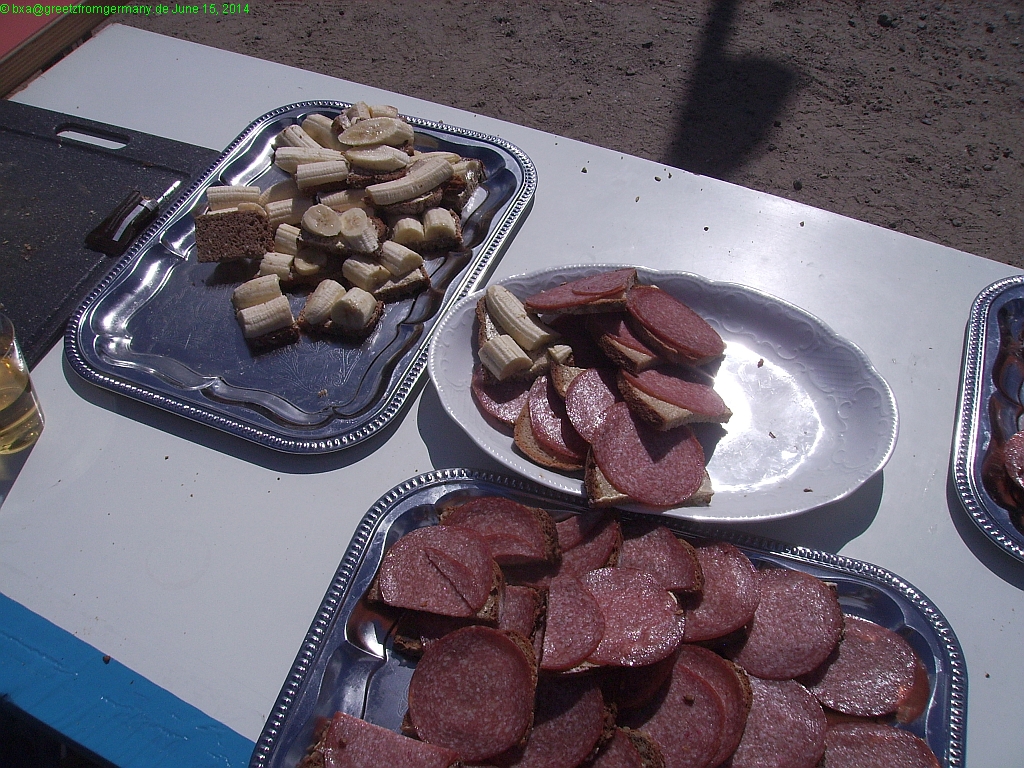 While the author actually liked and appreciated the salami sandwiches giving off loads of fat in the sun, the banana-topped Pumpernickel seemed a less appealing regional offering ...

Well, at least the food offered in the finish area was the kind as everywhere: 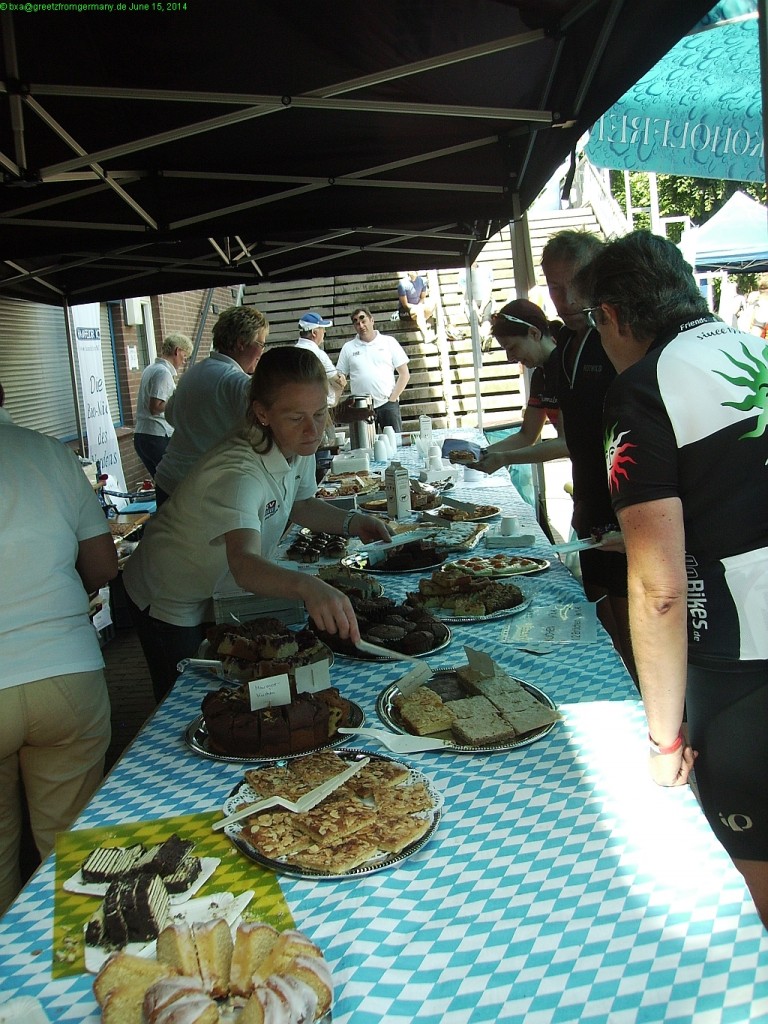 Very tasty varieties of the usual cakes at the finish area buffet - and loads of them!