With Warin turning out to be (a bit) of a bigger town than we had thought the previous evening and the endemics being so extremely friendly, the day started off with the pleasant feeling of security: Not only could we replenish on food and drink to live by in case of  today’s route  being a café-less one again; folks showed us to a gas station (sic) that actually carried four different bike maps covering all but a very tiny part of our remaining route. We felt so safe – nothing like yesterday’s map-less detour could happen to us again (although the day did end with a 20K detour again as the Hamburg-Rügen bike trail ended in a construction site – at least we had a map this time and only some 10K of our detour route were: again not covered by either of our newly bought maps :-(). 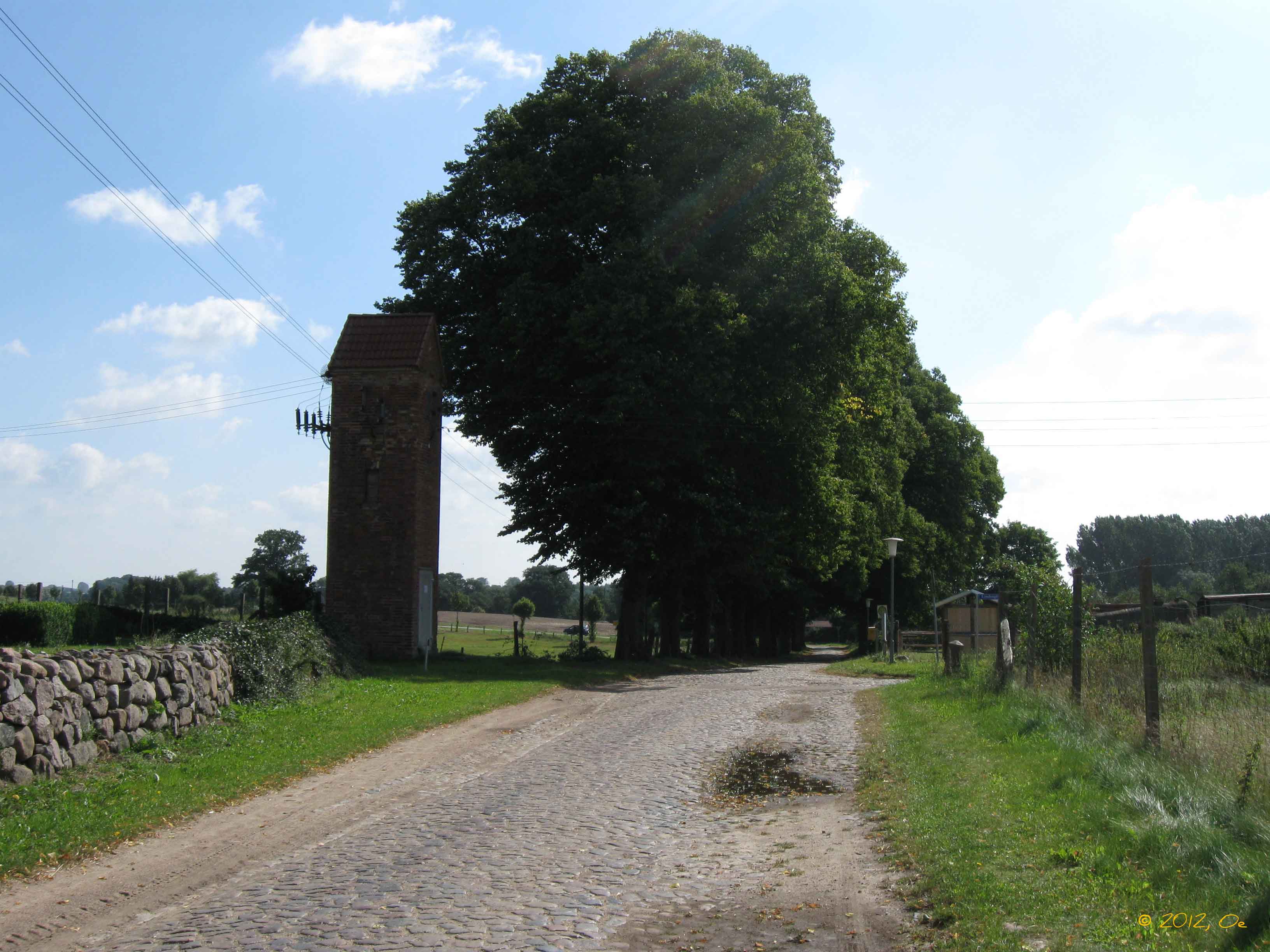 Time apparently stood still for the last 60 years or so ...

The first impressions of nature were rather calm and relaxed ones as well: More cobble stones slowing our pace down to a speed that allowed for a fox to stroll across the street, really taking its time. It’s an area in which clearly Homo sapiens is just one of many species doing their thing, not the dominating one (although, luckily, some of the streets have been freshly paved which made for very special biking fun as the extremely few cars had not yet have a chance to wear the surface down again). 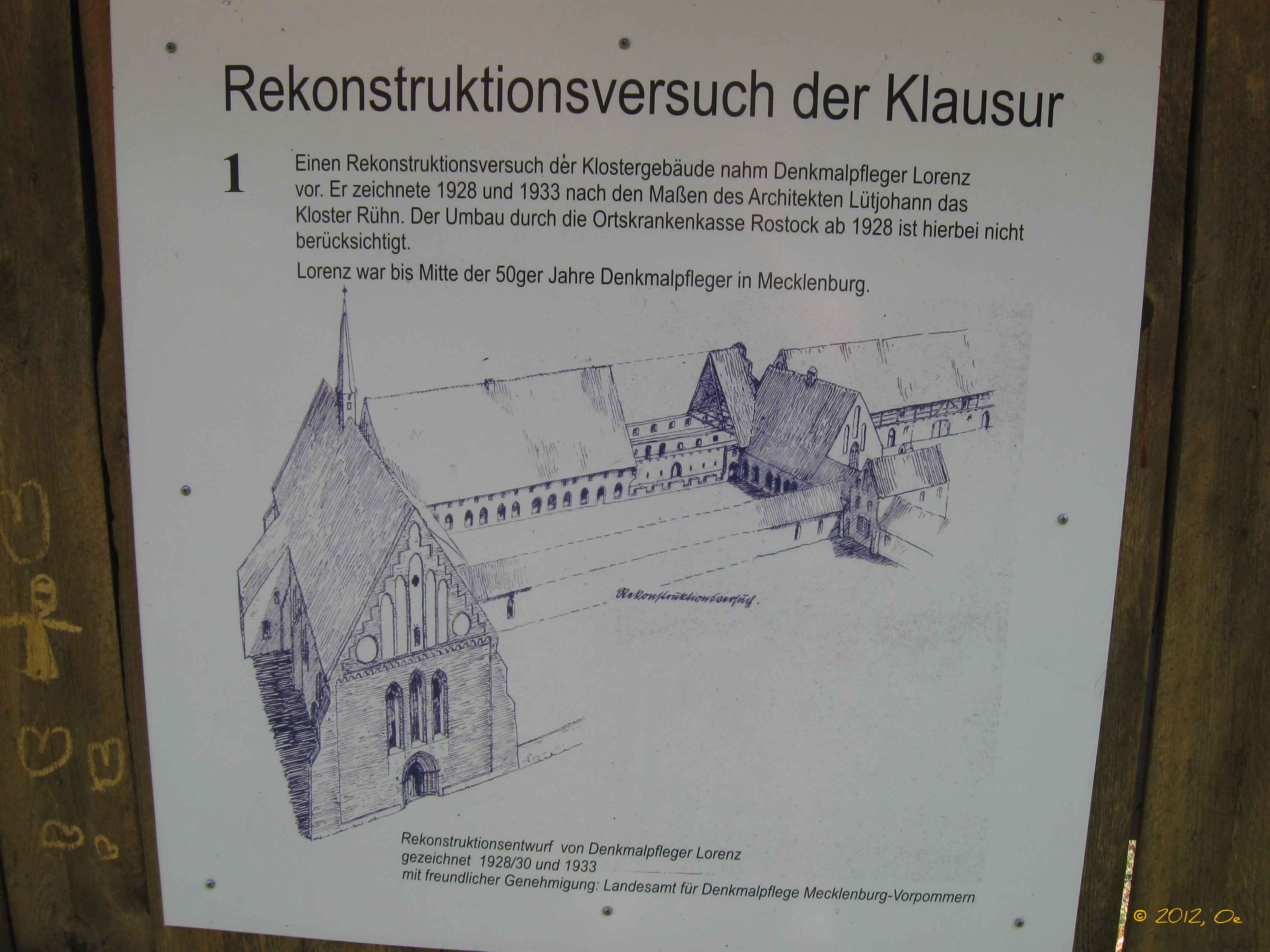 Attempt to detail the original contruction of church and monastry buildings inc. the connecting roofed walk-way between

To stay in that mood of calm secludedness, we stopped way before noon when we reached monastery Rhün. Built in the early 13th century as a women’s cloister, the walls saw many different sorts of inhabitants – from the original nuns to health resort patients in the early 20th century and kids with difficult backgrounds during GDR times (and a lot of other folks in the centuries in between). 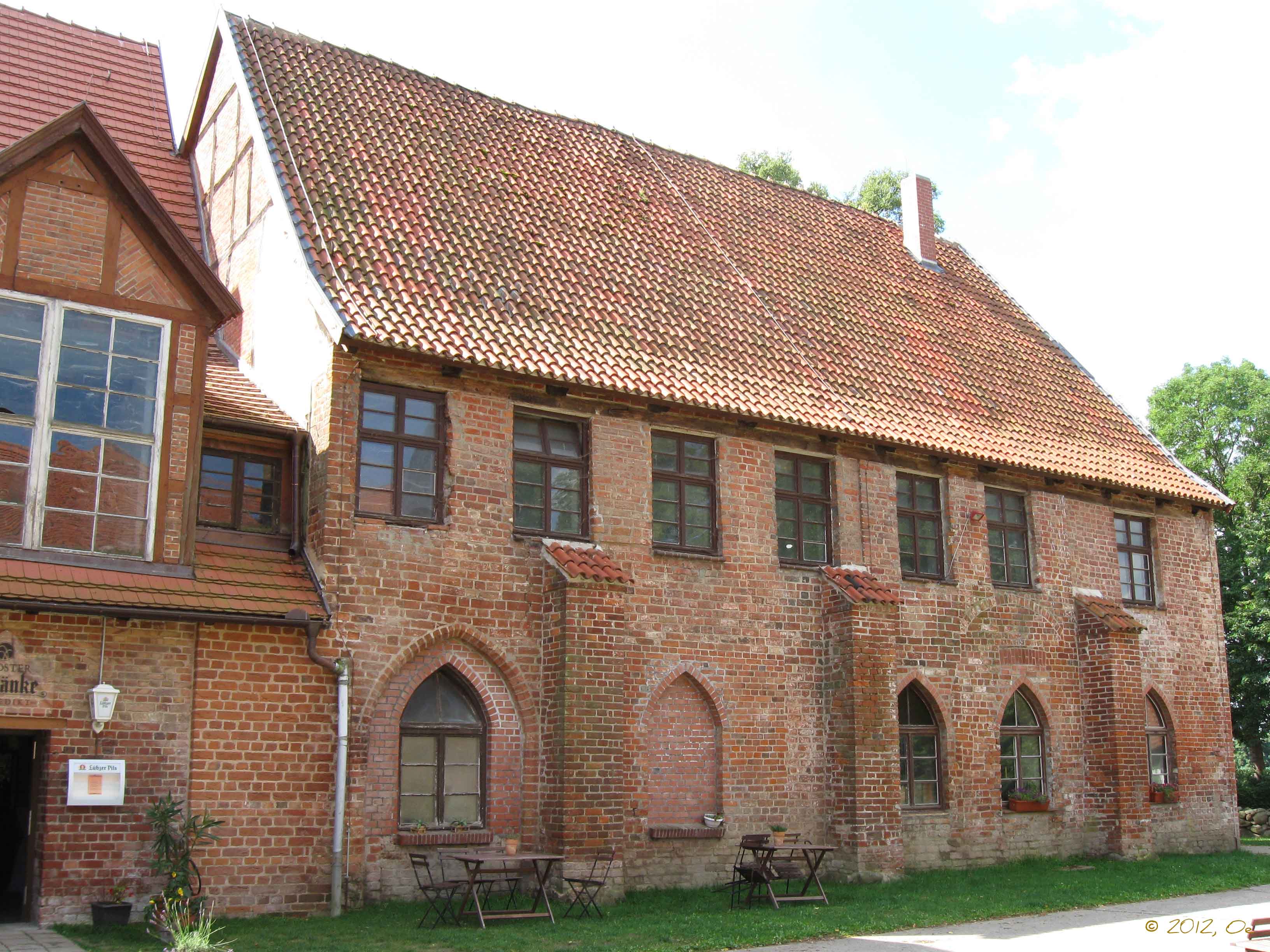 In 1990, one of the then-infamous Western German investors bought the whole thing for the obligatory 1 DM many objects have been sold for then; and ran it further down (not that there was very much room for running it down left then). This is when some locals could not bear it any longer but founded an association to reconstruct, renovate and revive the complete complex. 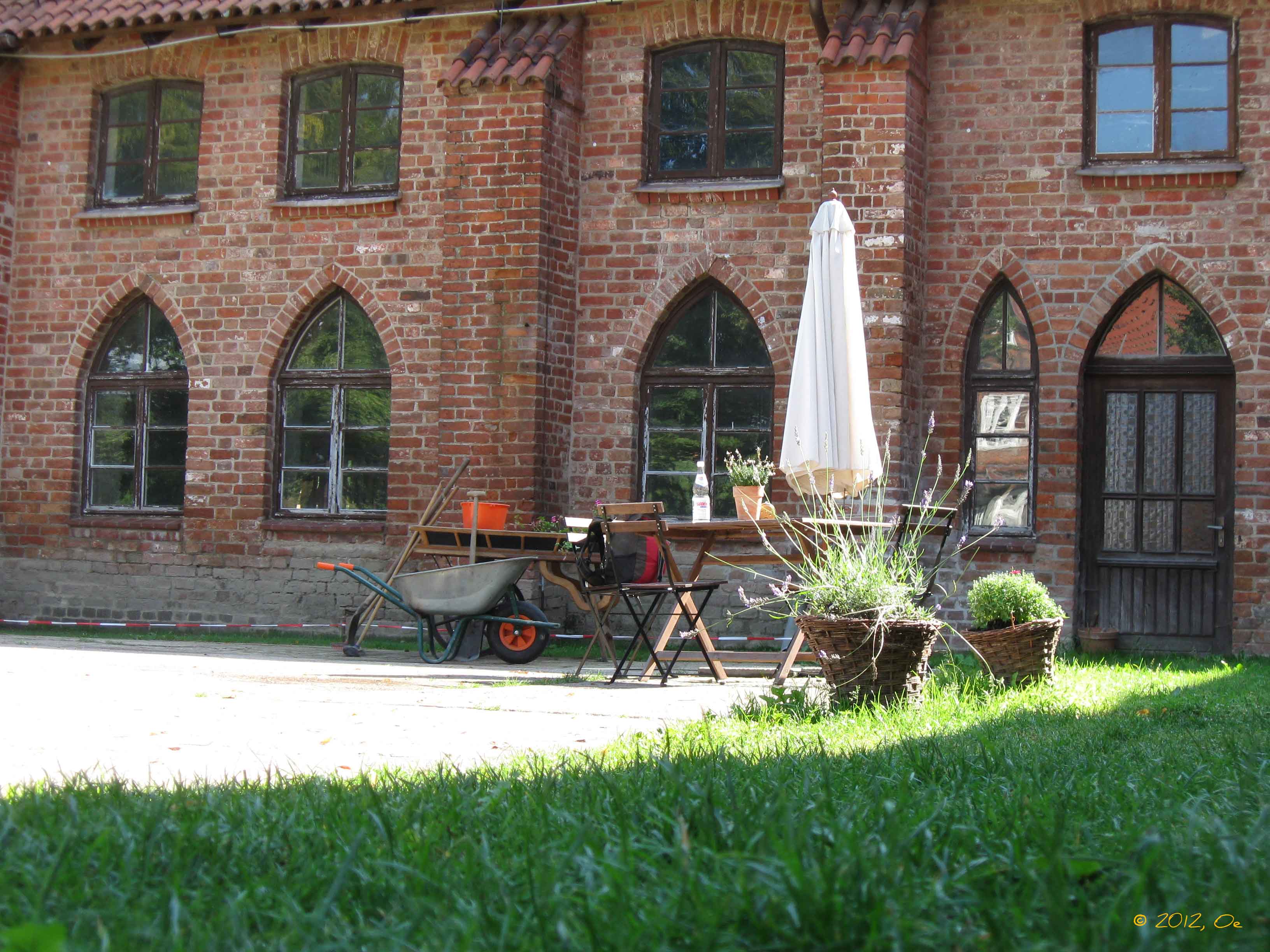 There is still a lot of work ahead of them, but given the fact that there has neither been a lot of time nor a lot of money at hand so far, it is pretty impressive what the association has accomplished already. 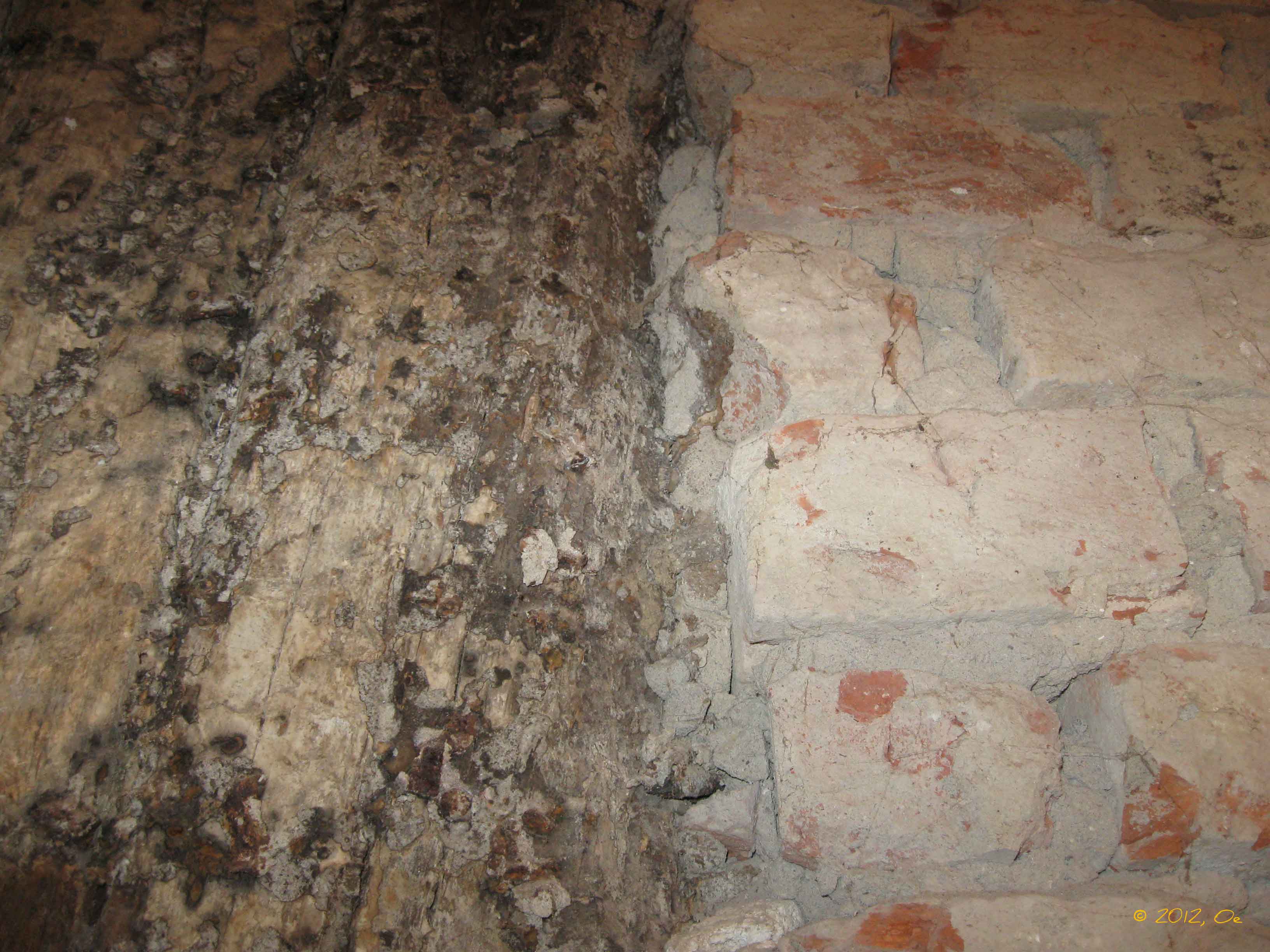 So, we were happy to leave some Euros with them – especially in exchange of some really yummy cake that went by the pretext of carbo loading. 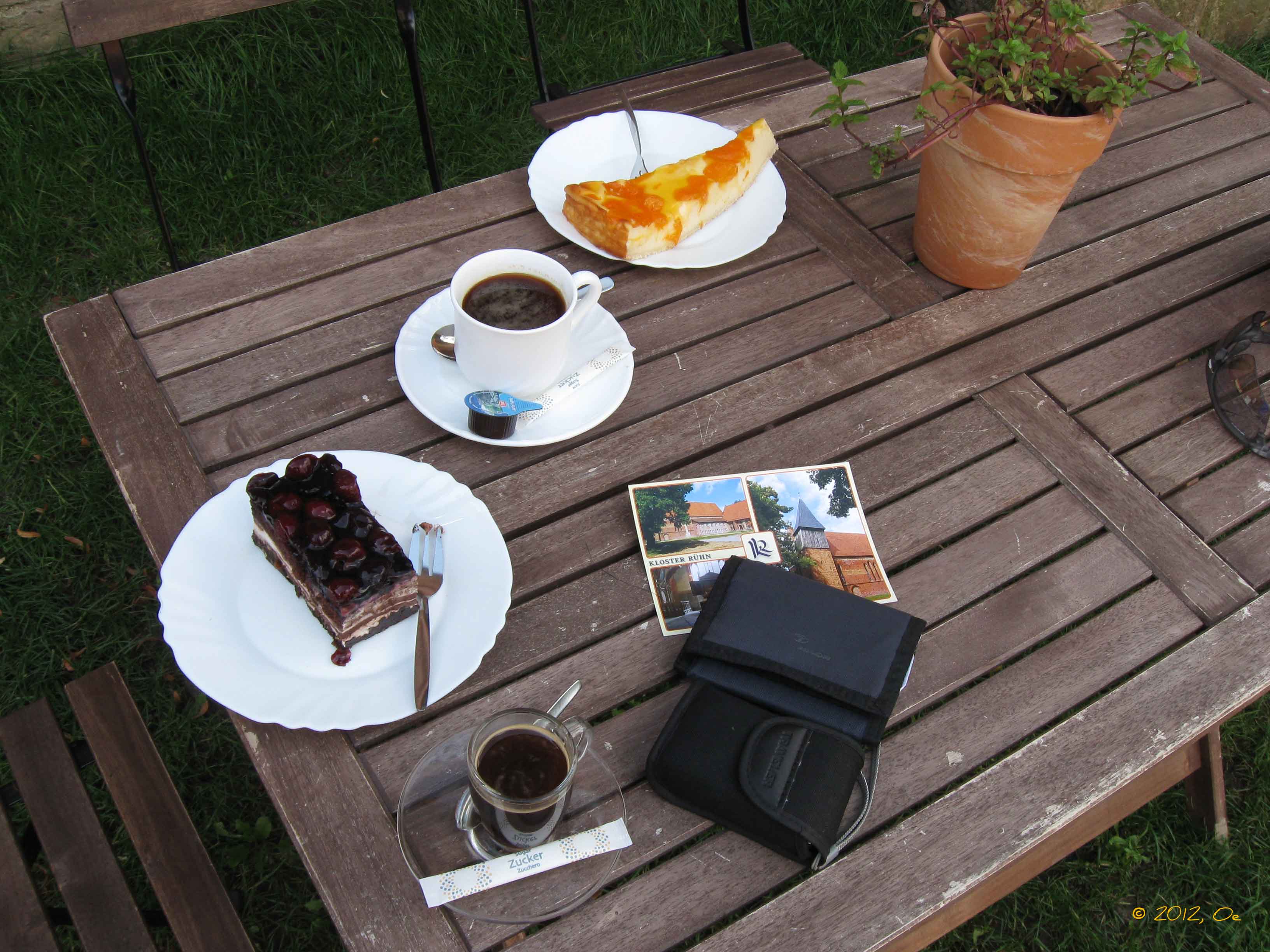 Multi-tasking the biker's way: Carbo loading and pledging for the monastery association at the same time

For some more kilometers, it looked like this would be the perfect bike packing day with lots of planned and unplanned for highlights along the way. E.g. we were anything but prepared for the town of Bützow – although we could have been, Bützow certainly has been around for long enough to be known with it being mentioned in official documents as early as in 1171. As we apparently had not done our home work, it was as unexpected as pleasant a site that greeted us when turning right into the heavy traffic of national highway B104 – but at the same moment bumping into the nice architectural ensemble on Schloßplatz, including the really odd and nicely pittoresque Krummes Haus (or „bent house“). 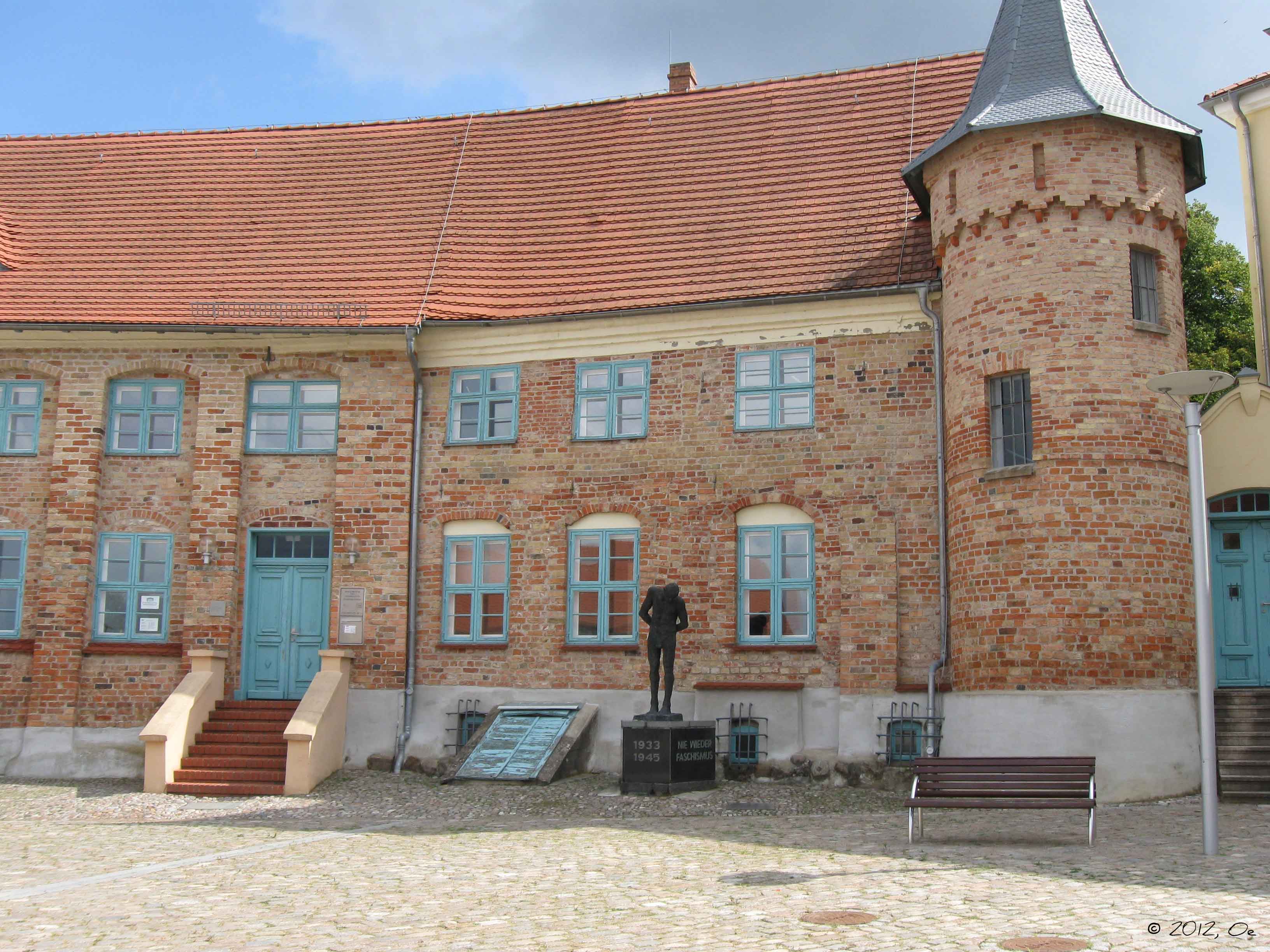 Krummes Haus in Gützow, since 1985 a memorial of the prisoners held at Kühlungsborn during Nazi regime, symbolized as well by the statue "Der Gefesselte" (the captive) by Sigfried Krepp

But then the relaxed mood was over rather abruptly: Thick and dark and pretty daring a thunderstorm was brewing up around us. And there was nothing we could use as hide out. 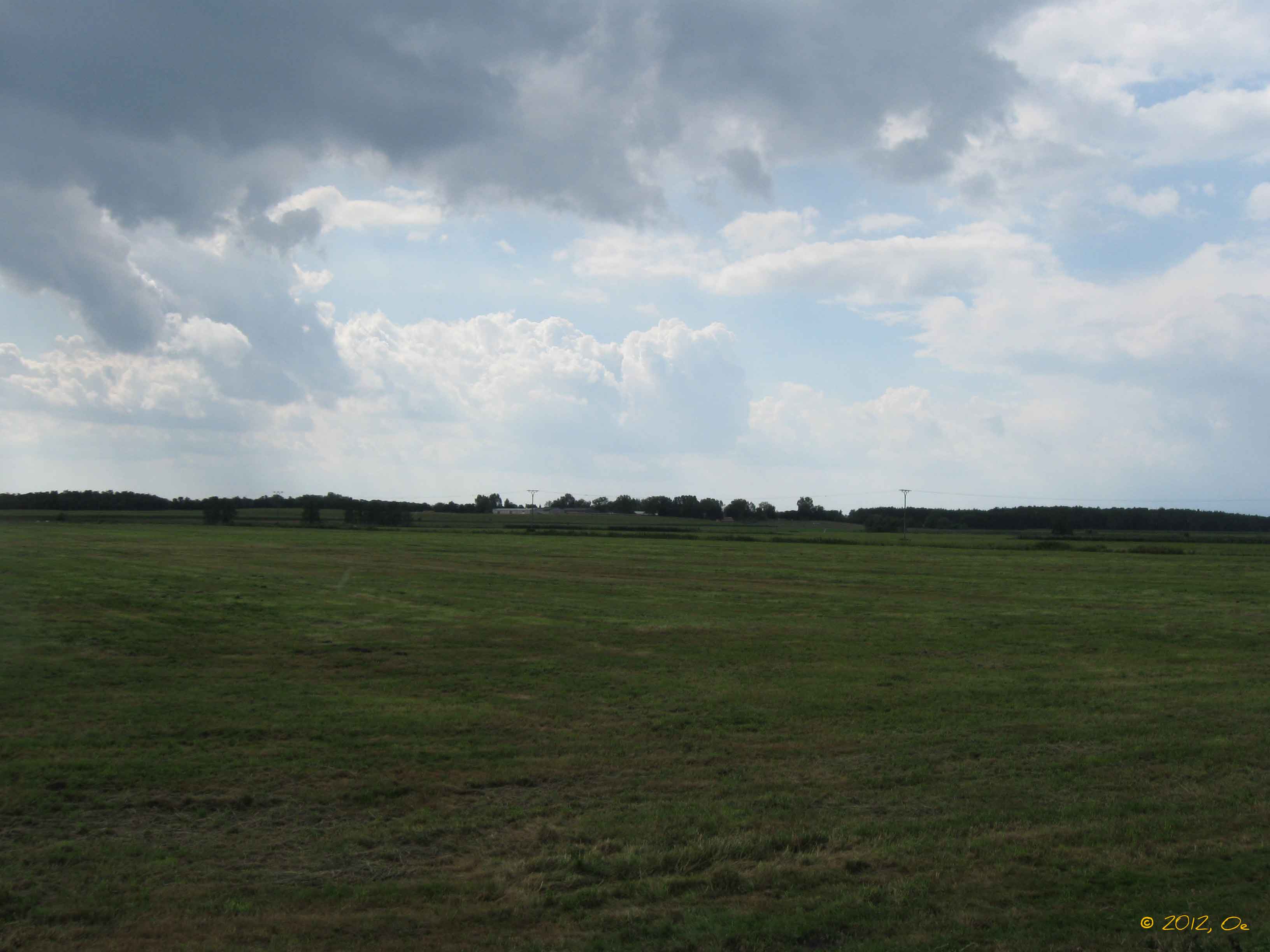 No shelter from a thunderstorm anywhere in sight 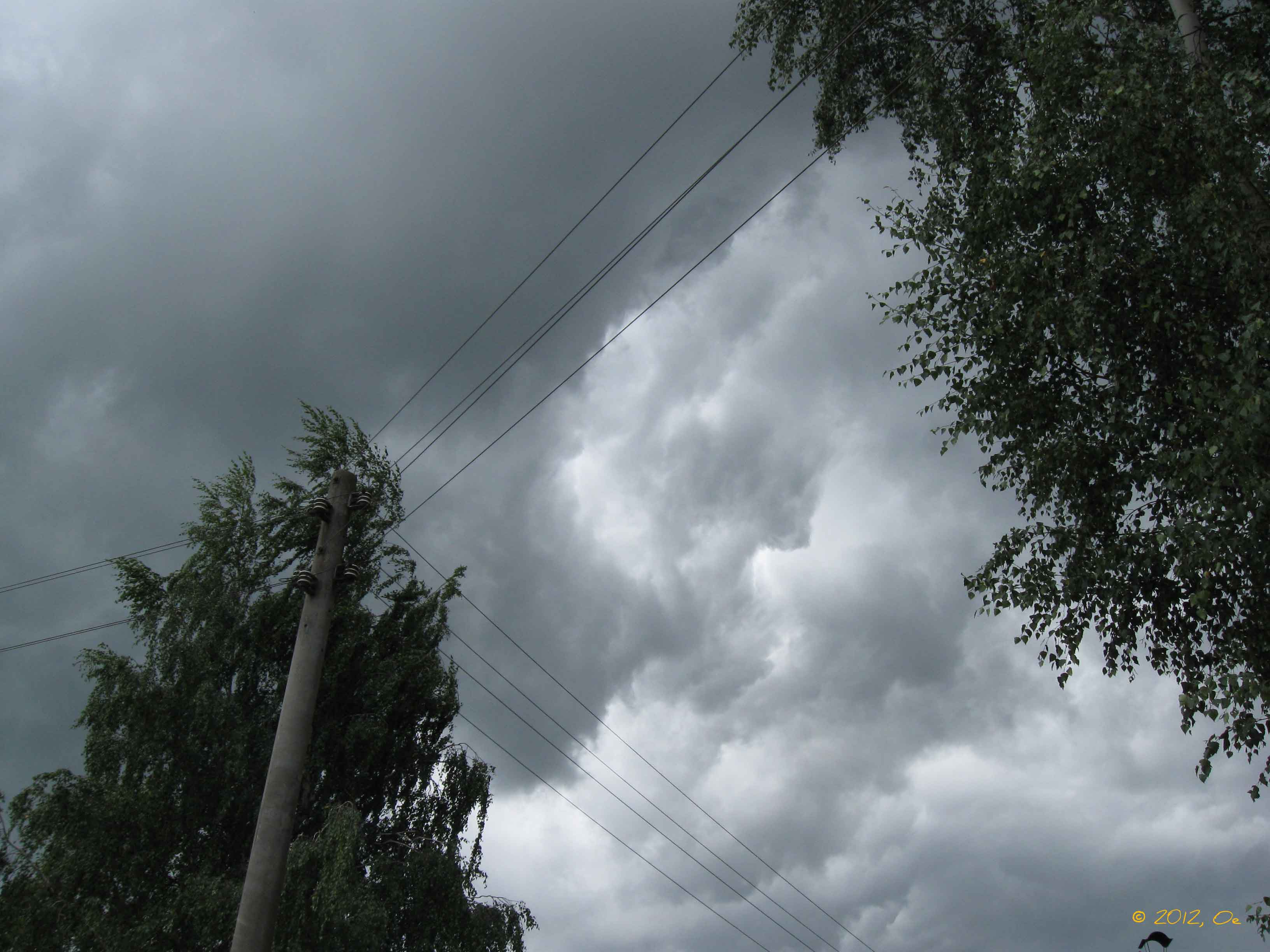 We sat the brief and less-heavy-than-feared rain out pressed against the wall of the only building there was on a stretch of about 8K between the woods of Bützow and Güstrow, our next stop with a variety of shelters such as bakeries, restaurants and ice-cream parlors. 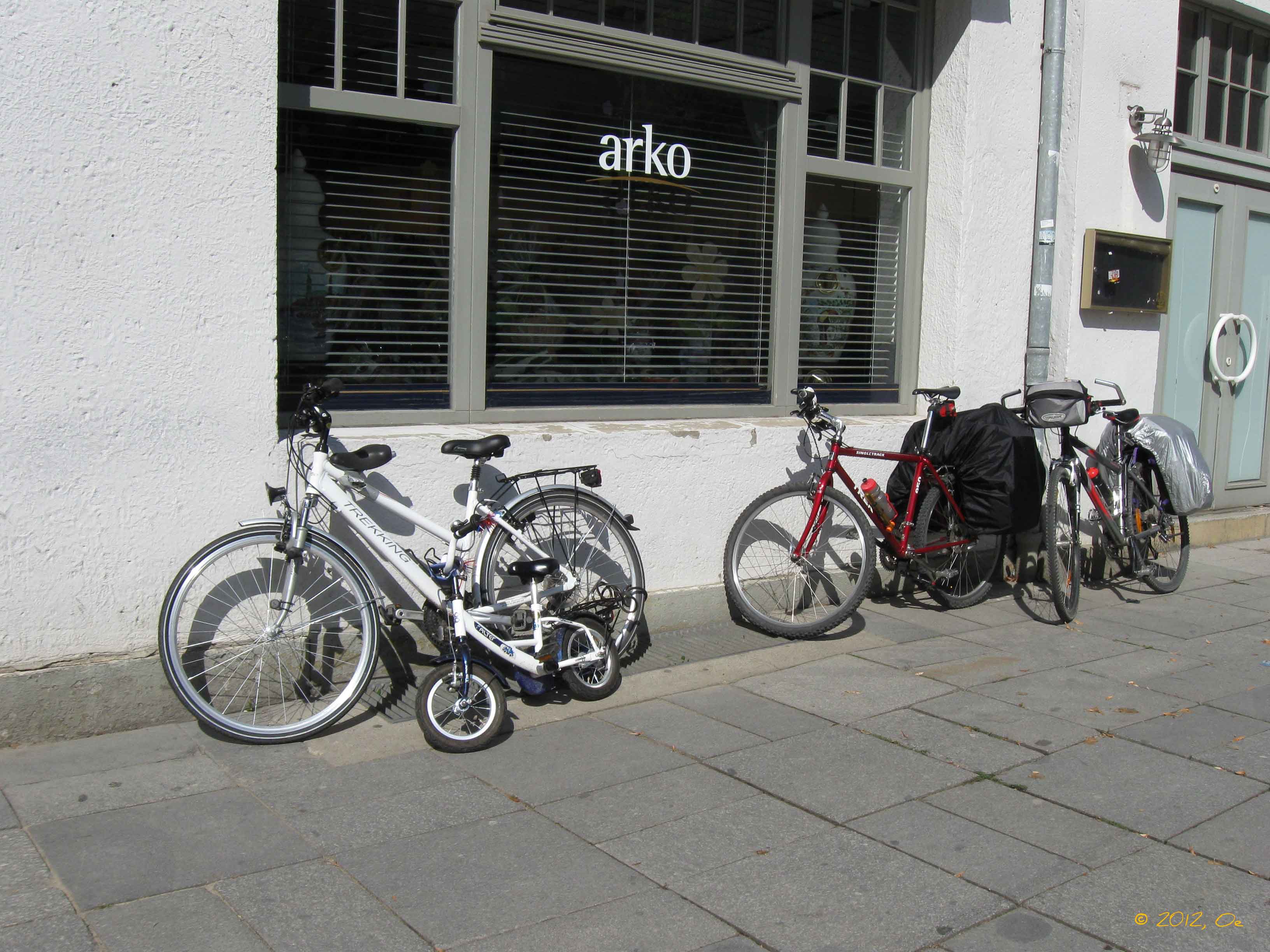 Small and big, everyone was seeking shelter from the next rush of rain

The next rush of rain only reached Güstrow some minutes later than we did, so we were sitting in the dry already, in front of a sandwich and cake.

After that, the blue skies tried to impress us again and to lure us into believing that Summer was back in full flow. But neither was I sufficiently warmed up again nor did I trust the clouds‘ promise to get off my rain jacket during the rest of the day. It worked: No more rain for the rest of the day! 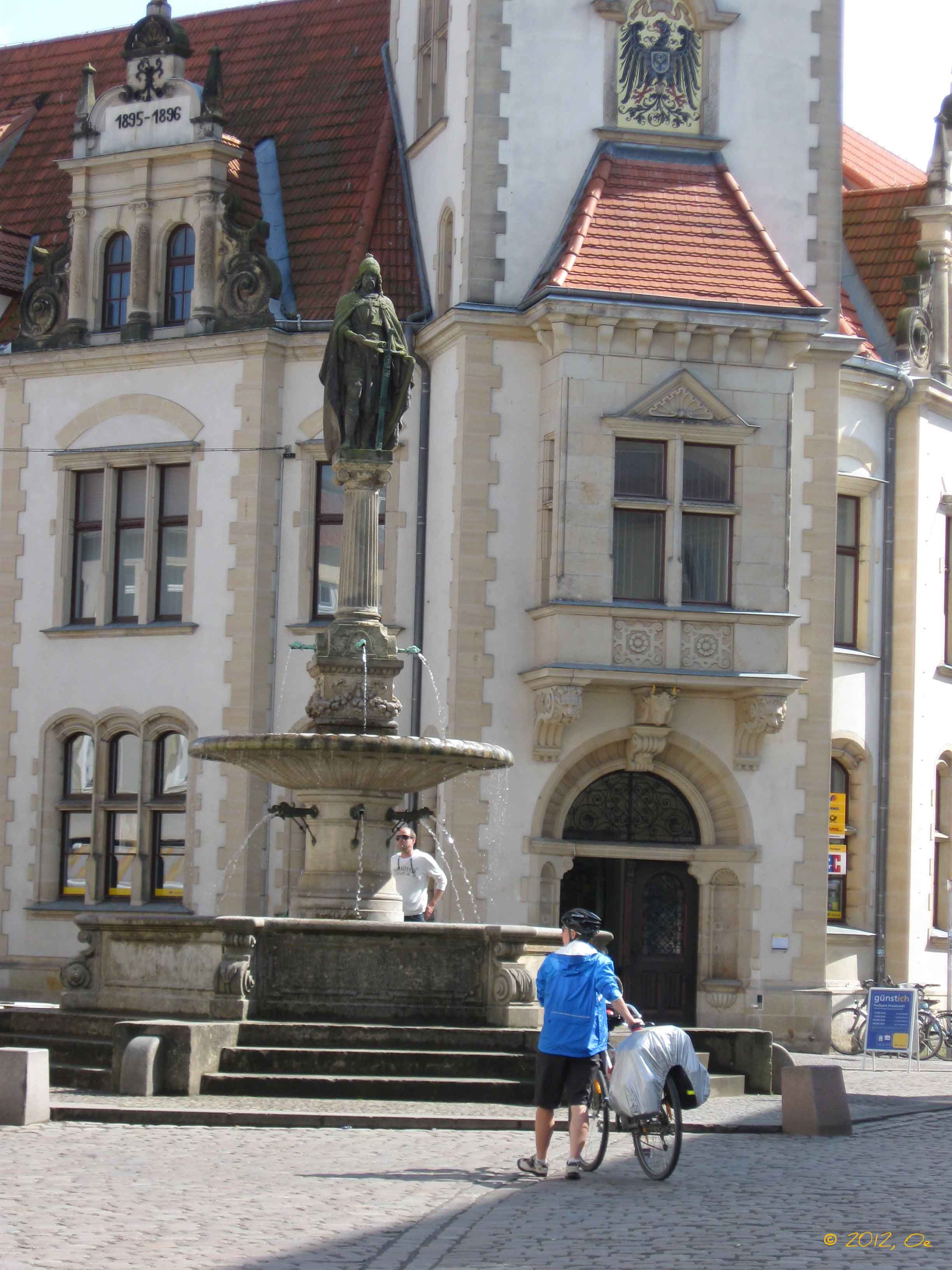 Blue rain jacket kept on to keep the blue skies around