It was a bit of a slow start today, but a very fun one. We needed to pump some air into our tires and did not really feel like doing so with our miniature emergency pump which is nothing more than a declaration of intent. Since we had been told about a bike shop in Teterow’s buzzing and humming shopping area, we went there first. 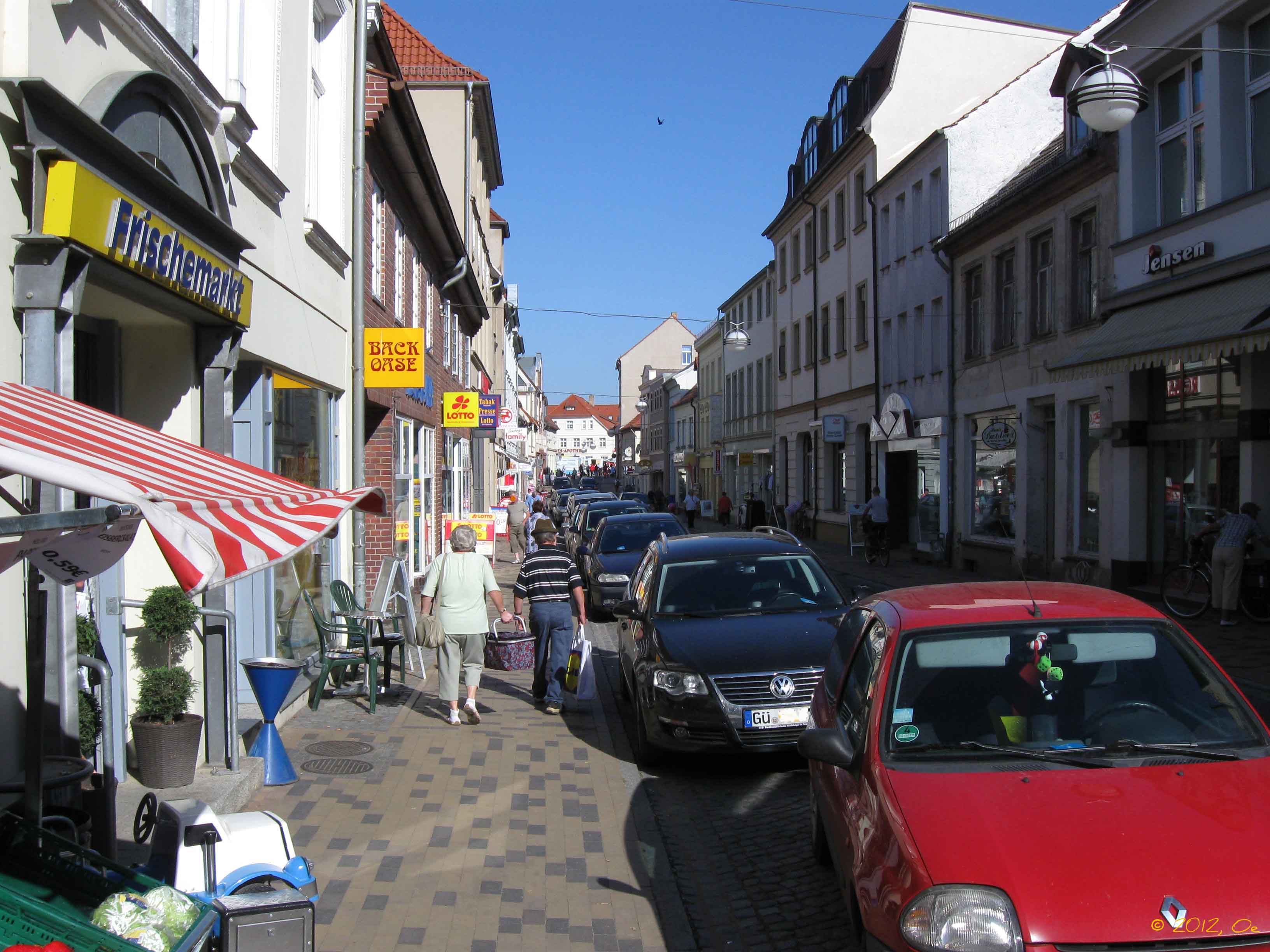 The old heavy guy in the rather non-hip bike store was of the typical Northern sort of little words. Asked whether he was the bike shop guy, he just grunted a „he’s in the back“ – from where the first guy’s clone appeared only seconds later. It was still dark in the shop, the guys did not talk – so it was not even clear whether the shop was open. So: „Are you already open?“

The answer „The coffee maker is running already“ was taken as an affirmative one. Bike shop guy actually managed, with a lot of huffing and puffing and grunting under his heavy breath, to produce a foot pump with some sort of rather special-looking pump head. Ah, we did not have this [insert here some incomprehensible Russian (??) valve type]? Ah, well, if it’s those [grin] French valves, then we need this adapter (good he called it an adapter because it sure looked like some sort of useless clutter). 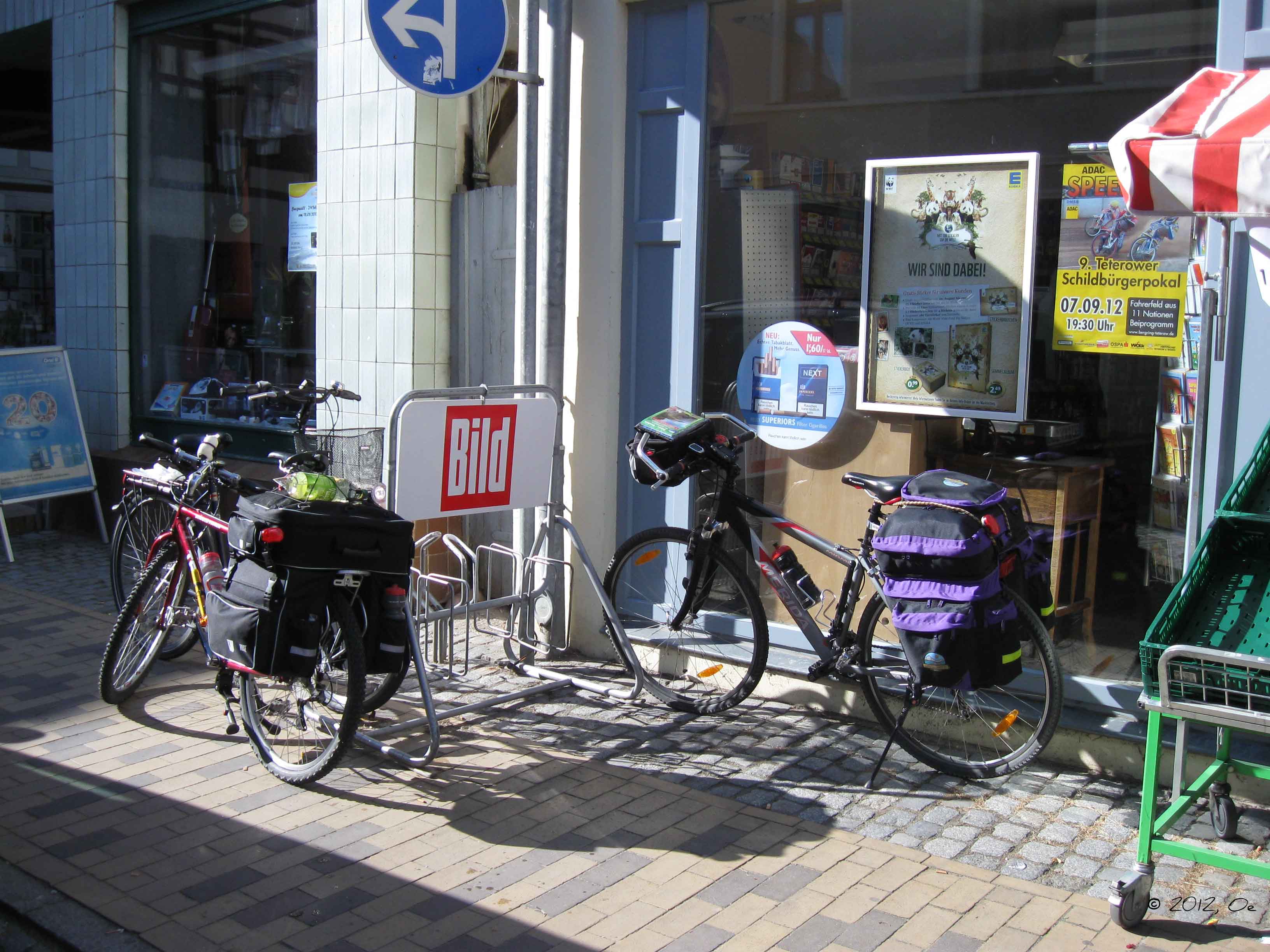 Adapting to the speed of Teterow (and the walking frame pusher-populated miniature food store), i.e. really slowing down for the morning

So we pumped and the three heavy guys kept making comments and hanging out on the pavement with us. When I straightened my back from pumping tire number three, another old heavy guy has joined us. Just staring, not talking – apparently no acquaintance of either of the other two. He just stared and slowly swung his head back and forth between the also slowly talking parties. After 10min or so, nothing else was left to say. We stood for another second or two in silence, not wanting to rush the guys who may have thought about the next remark still. And then left with a waving hand and a silent chuckle or two. 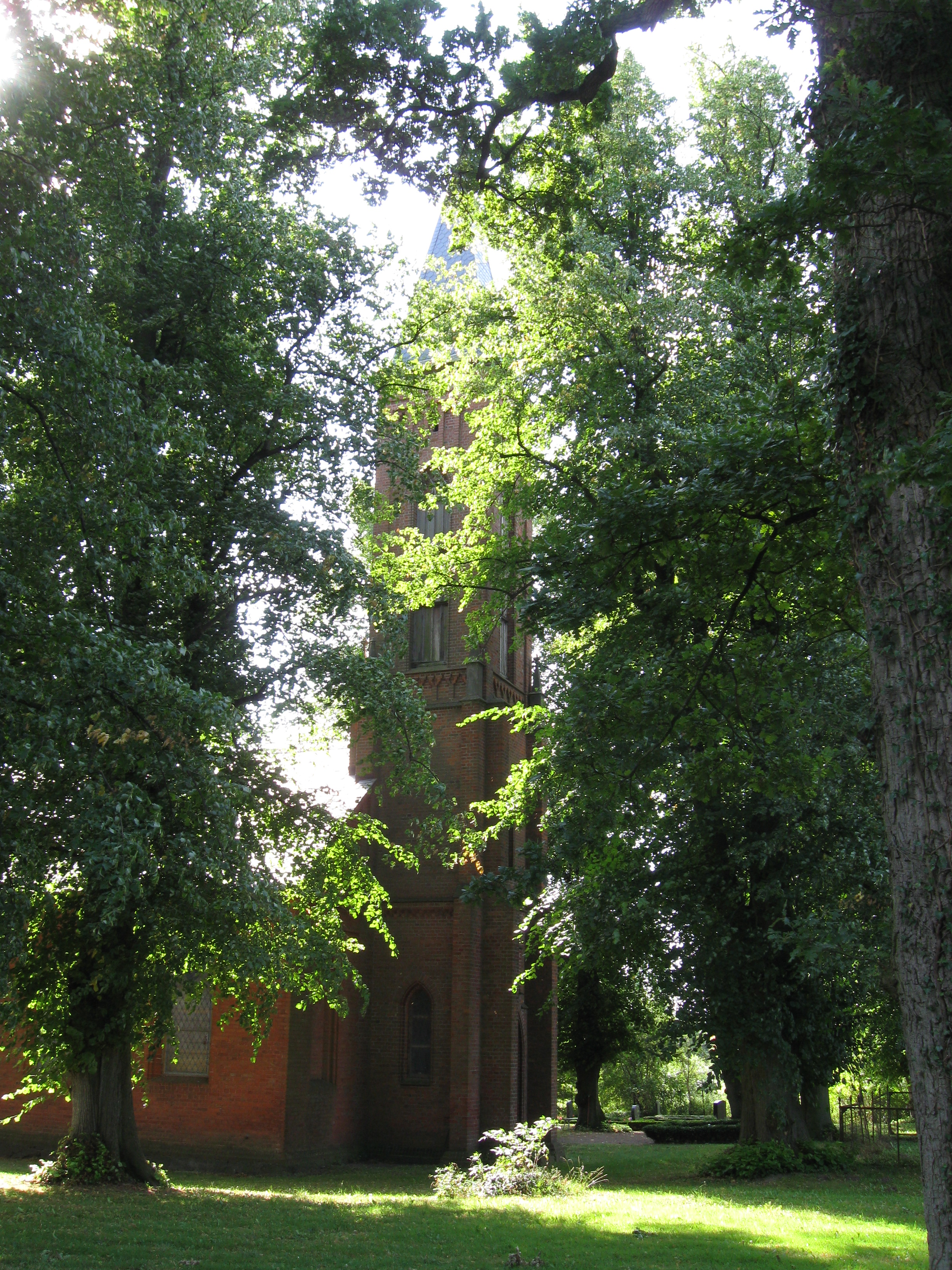 Modern baroque church in Groß-Markow, built in 1850 by the capitular of Magdeburg and Halberstadt

Well, maybe it was good the morning started so slow and relaxed, because after a lot of unplanned for sights and highlights followed. Not only did we see yet more brick stone churches of the impressive sort, we were totally unprepared for the remnants of the historic abbey and castle of Dargun. 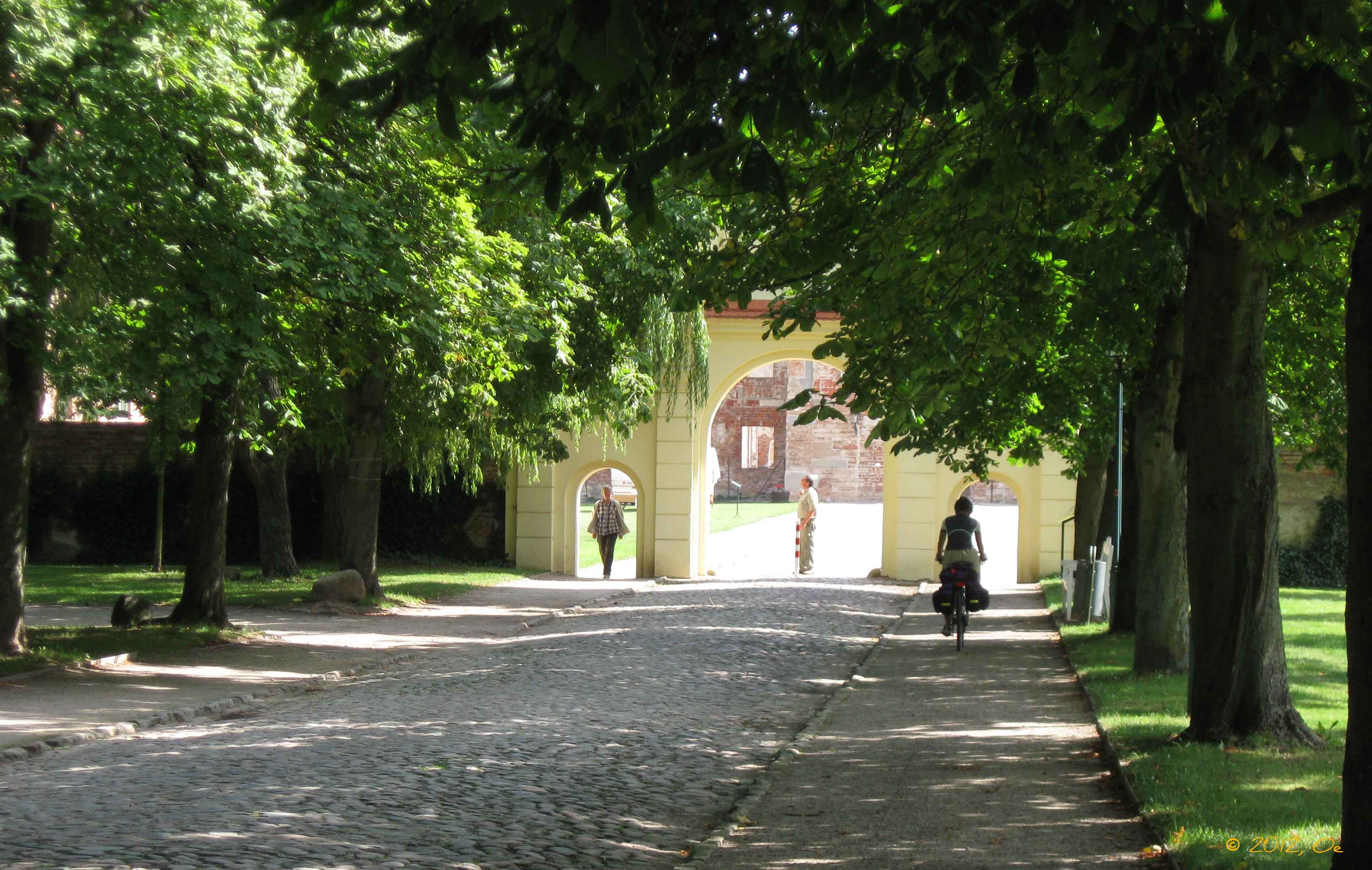 The Yellow Gate (Gelbes Tor), the entrance to the ensemble at Dargun, has modeled the logo of the very first "Tag des Offenen Denkmals" in 1993 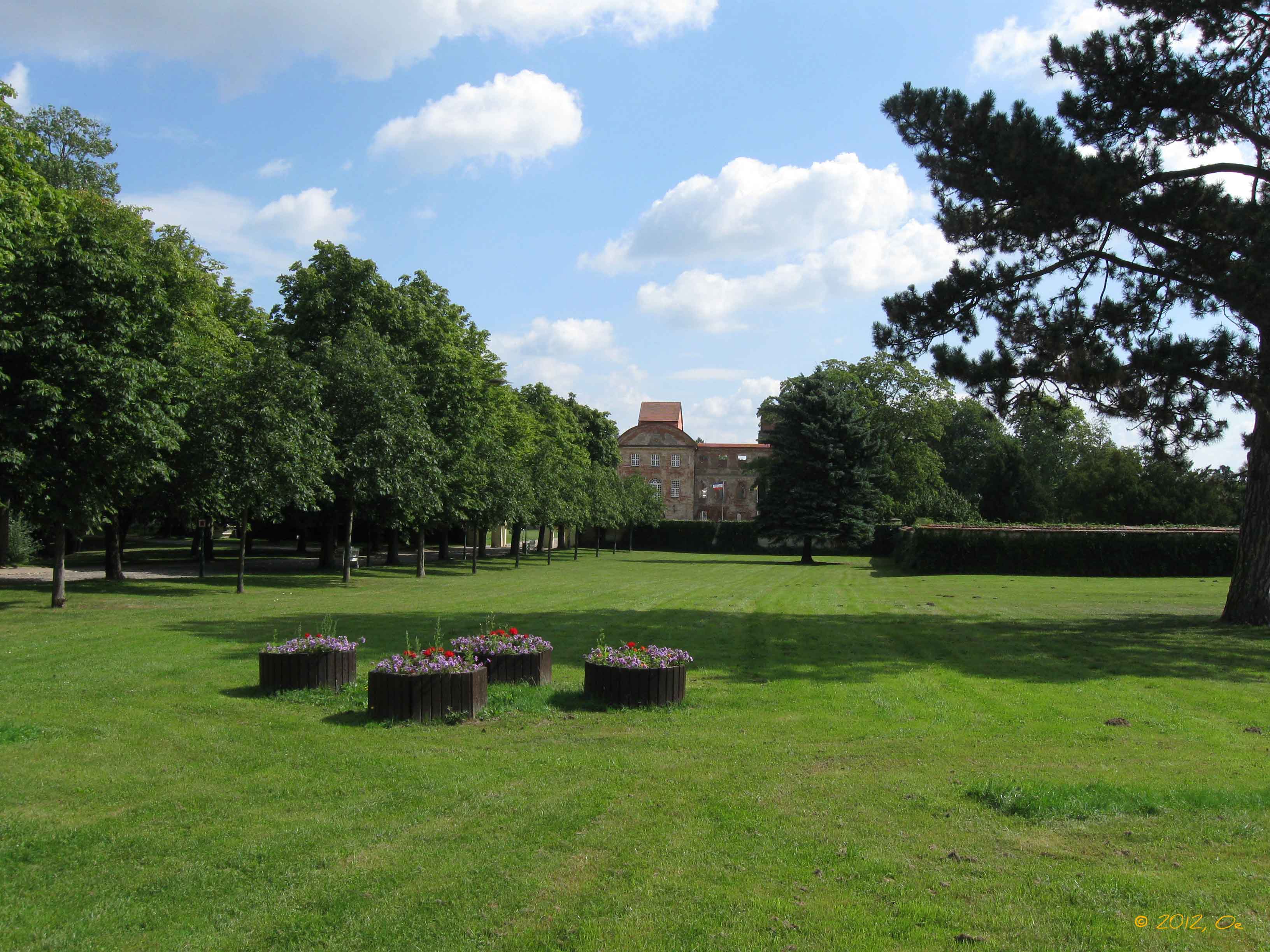 Park of Dargun abbey and castle

It is even older than the monastery at Rhün: established in the late 12th century, left by the original Cistercian monks after a few years and re-established as a monastery in 1208. 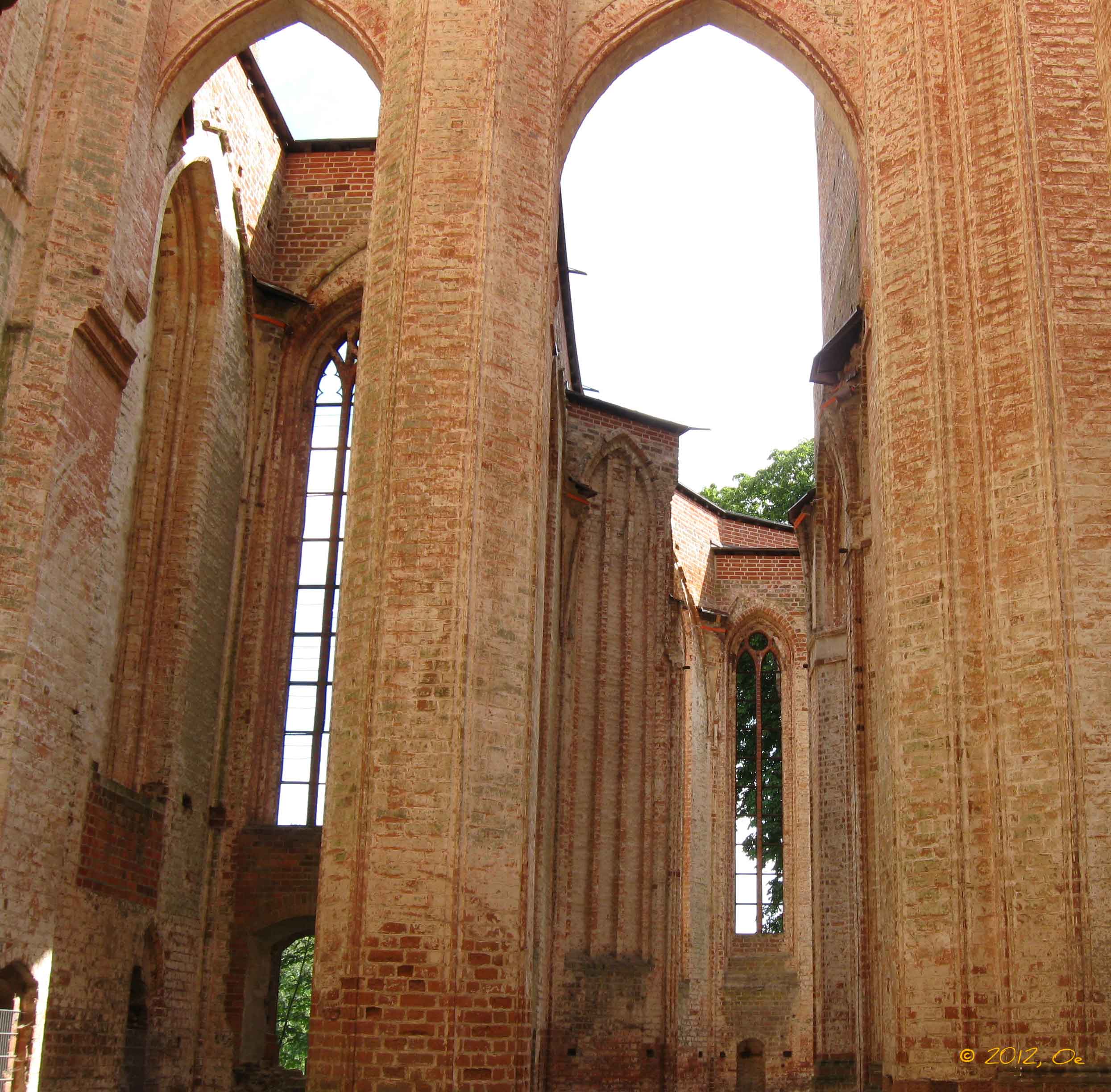 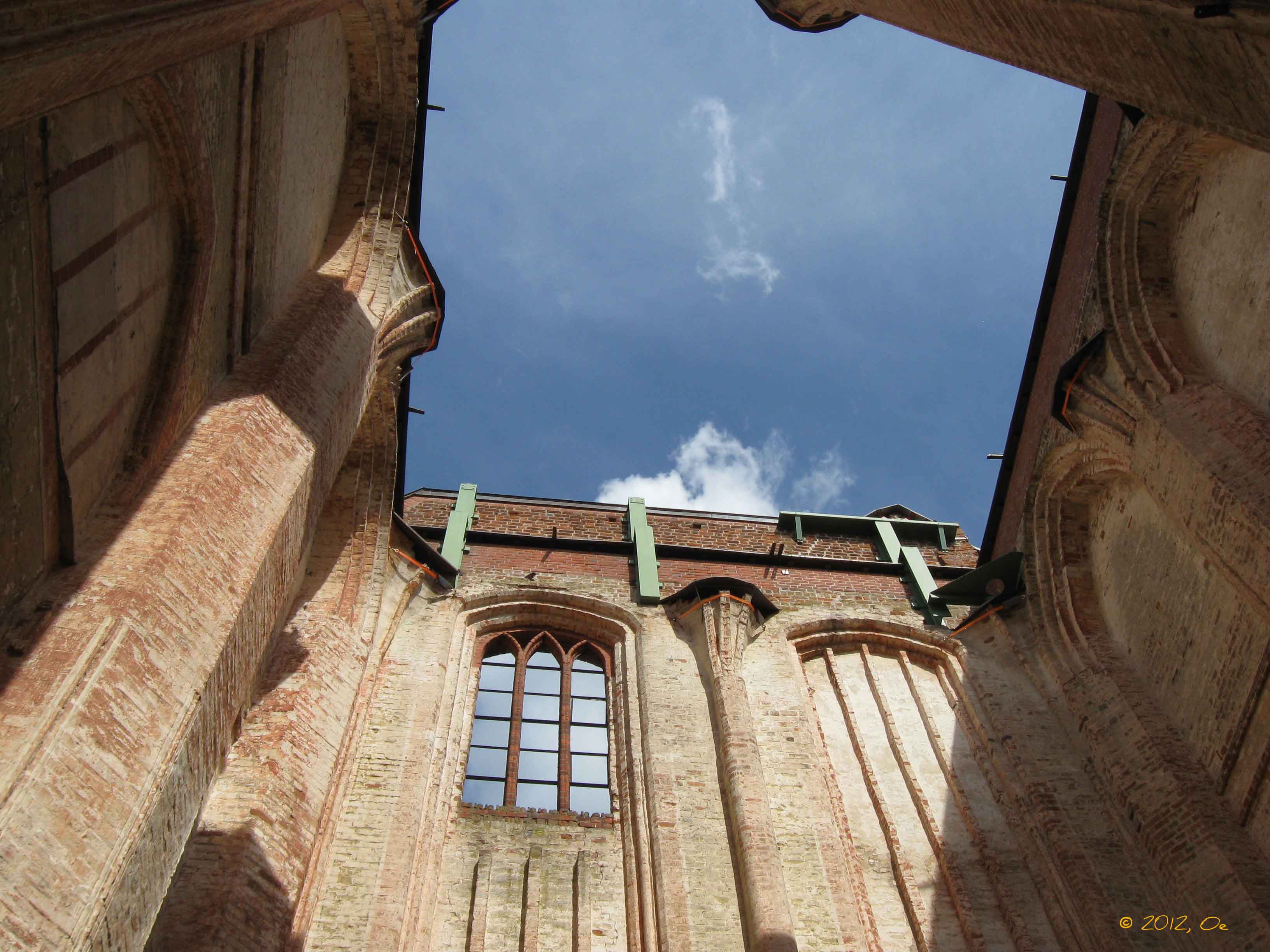 A glimpse of heaven: The impressive power and beauty of the abbey's medieval cathedral building

In the 16th century, the abbey was secularized, destroyed in the war of 1618 – 48, re-built and expanded to a veritable castle by Duke Gustav Adolf. 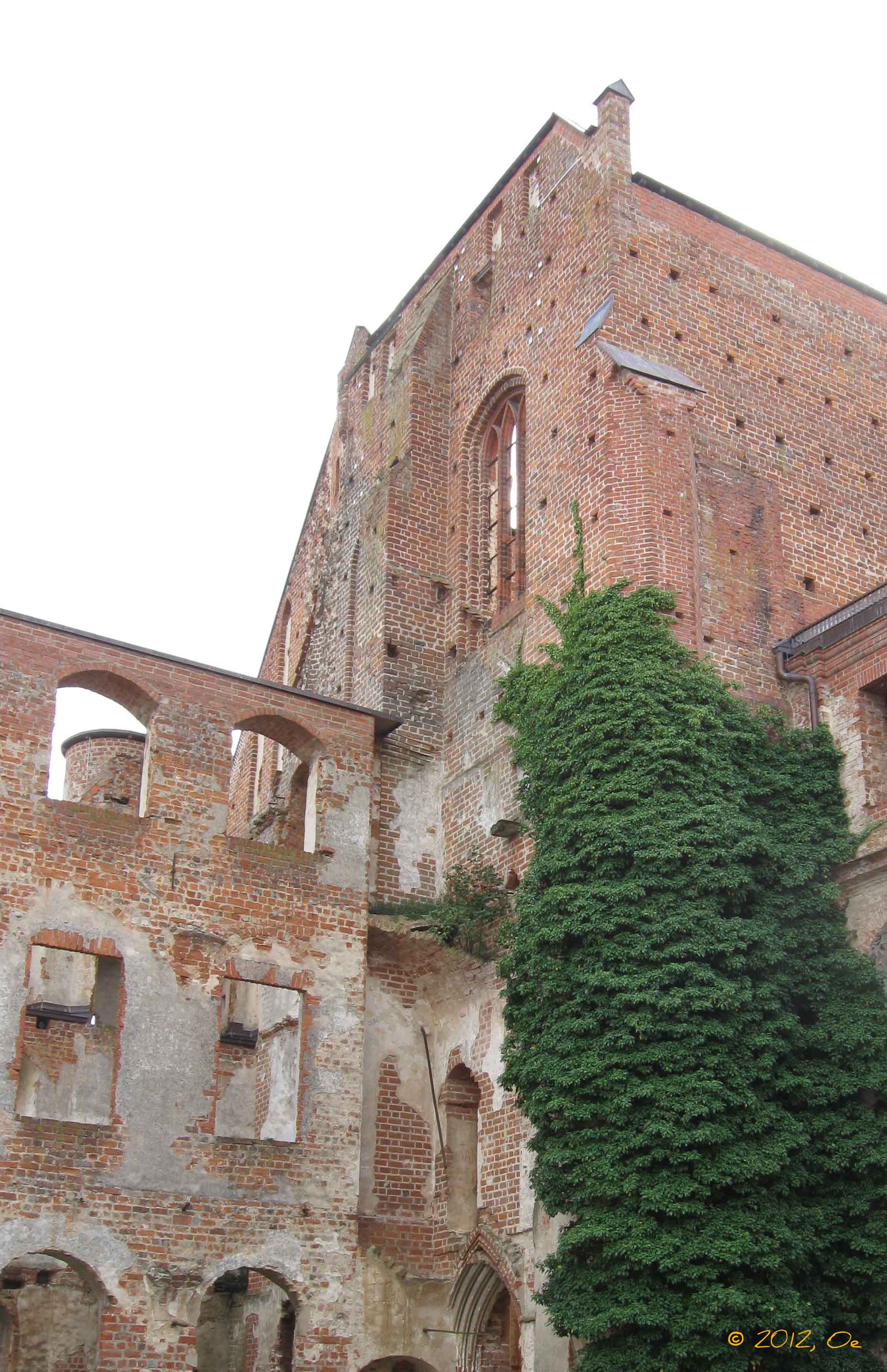 The walls burnt down in 1945, but this ivy shrub survived and even prospered

The brewery, however, was already expanded about a century earlier. Too bad no beer is brewed there any more, so we had to content ourselves with a sip of water from the bidon before setting off for the remaining 60K of today’s stage. 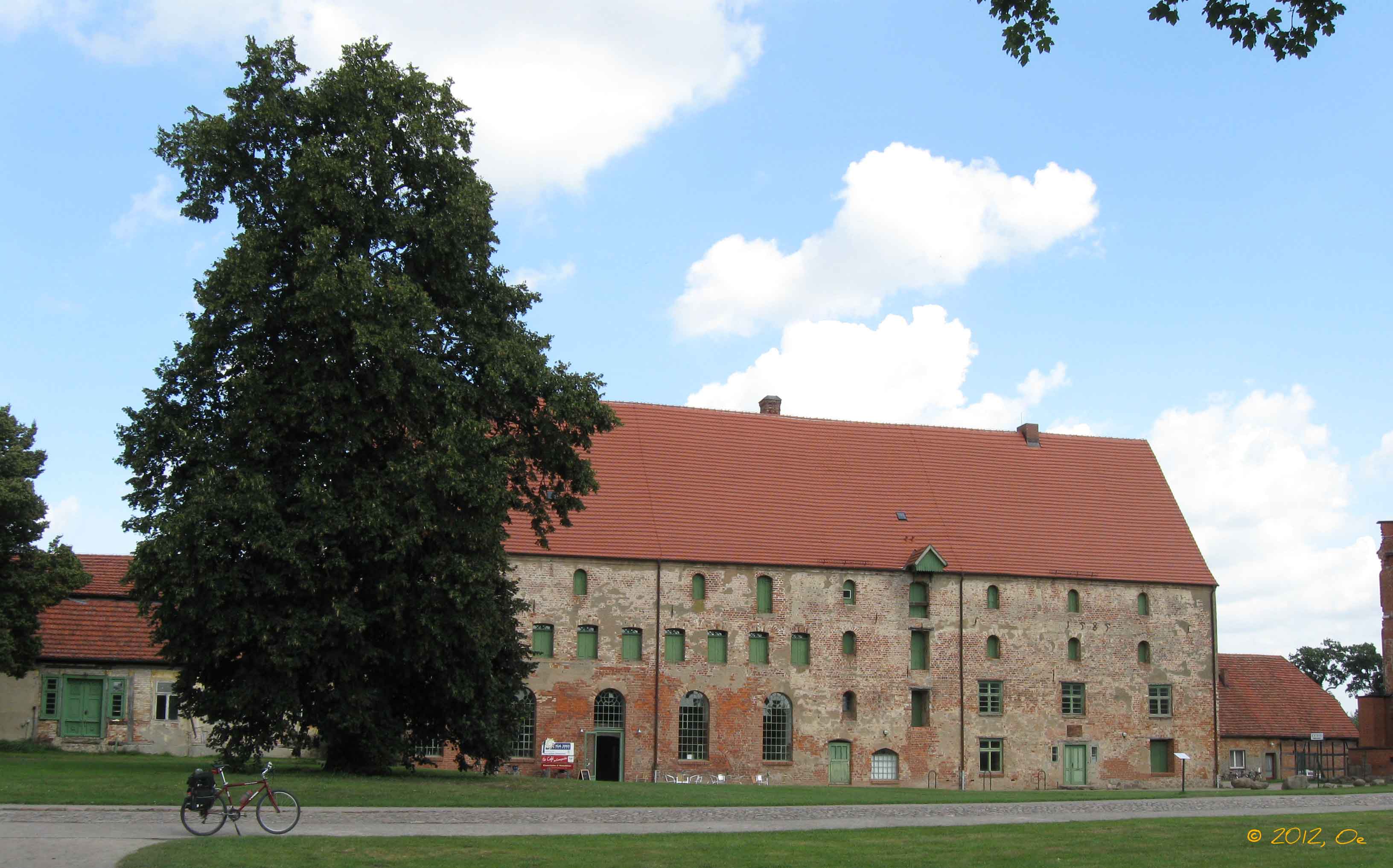 The brewery was expanded to this huge building in the 16th century, after secularization.

Won’t say much about the two cities en route today which call themselves „city of the Hanse“ (Hansestadt) since after the reunion of Eastern and Western Germany: 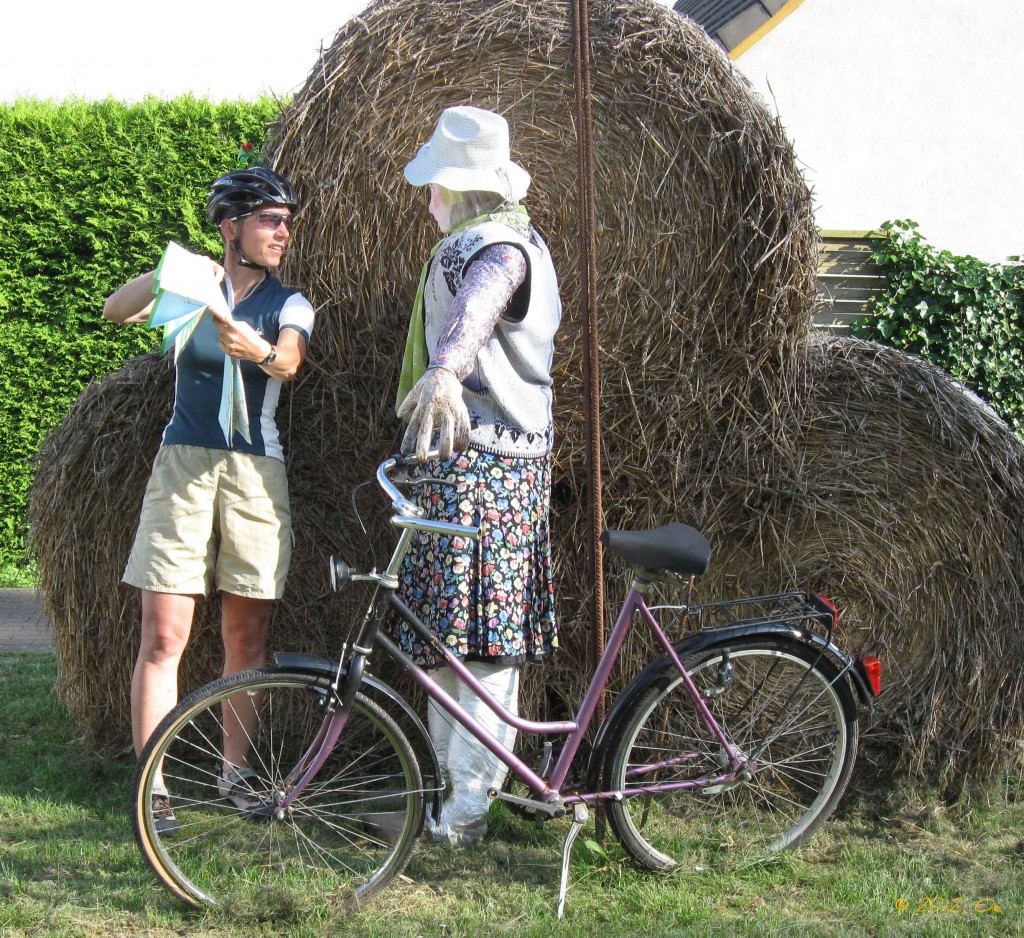 Being from Hamburg (Freie und Hansestadt Hamburg, to be exact) with heart and soul, I have a hard time accepting that Greifswald, Demmin, Rostock, Wismar and the likes (including Lüneburg, btw) are allowed to call themselves part of the Hanse. 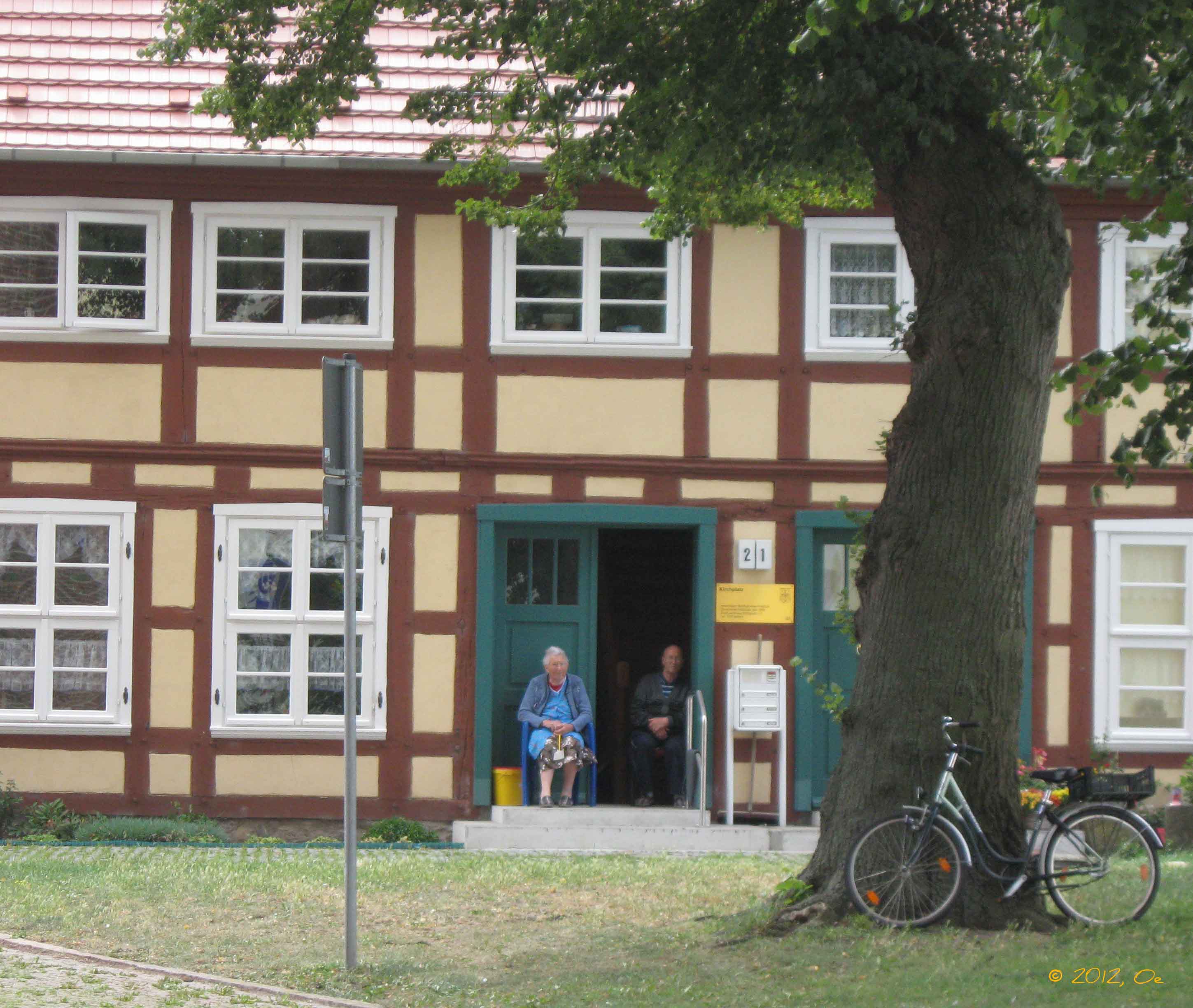 Letting the day go by in Demmin, "the forgotten city of the Hanse" 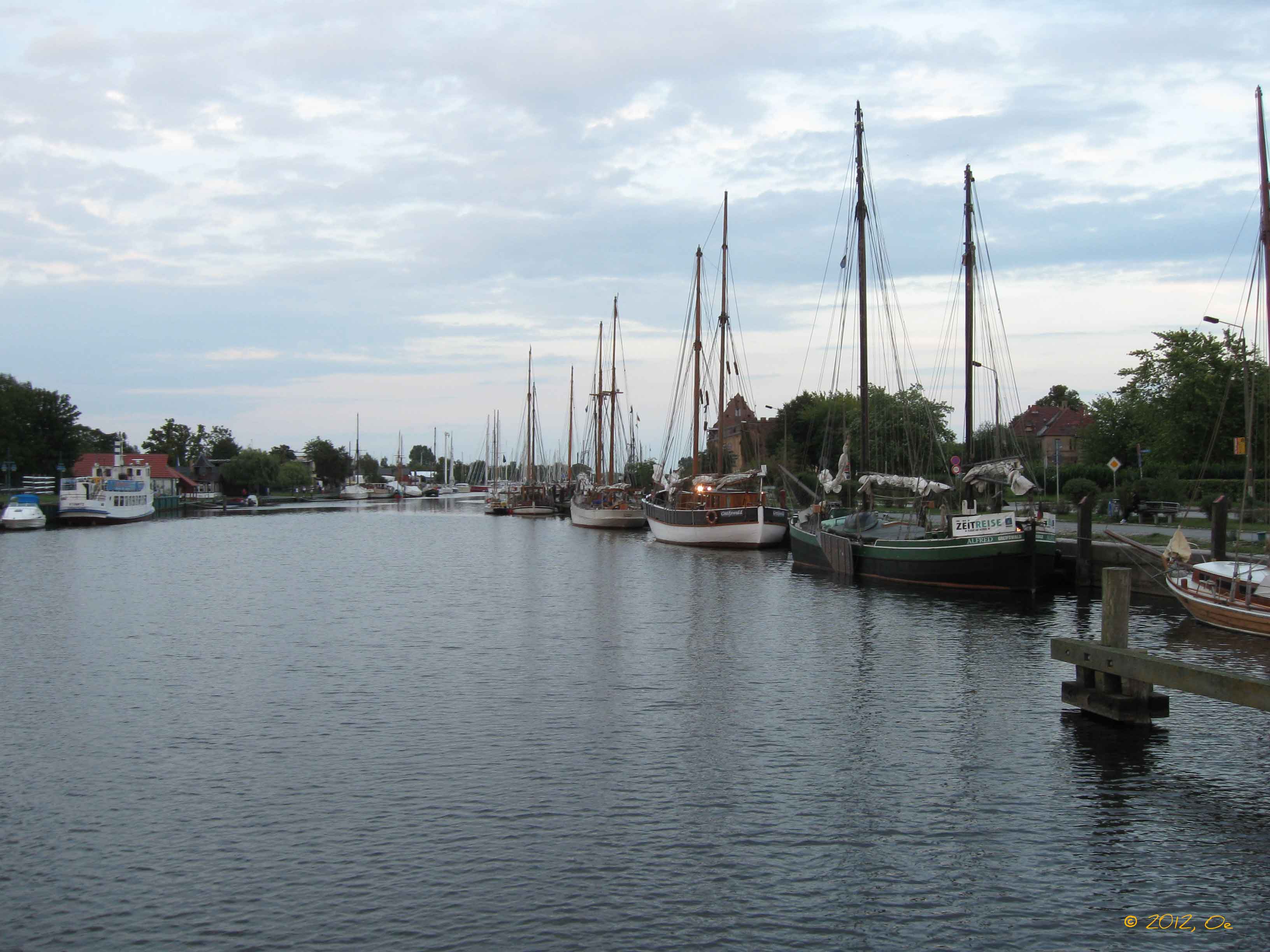 That although only Hamburg, Bremen and Lübeck have been authorized in 1629 and, again, in 1641 to serve as trustees and advocates for the union of Hanse cities. It hurts my heart (and hanseatic pride) to see a total of 21 German cities carry that name and title of mercantile honor, responsibility and tradition. 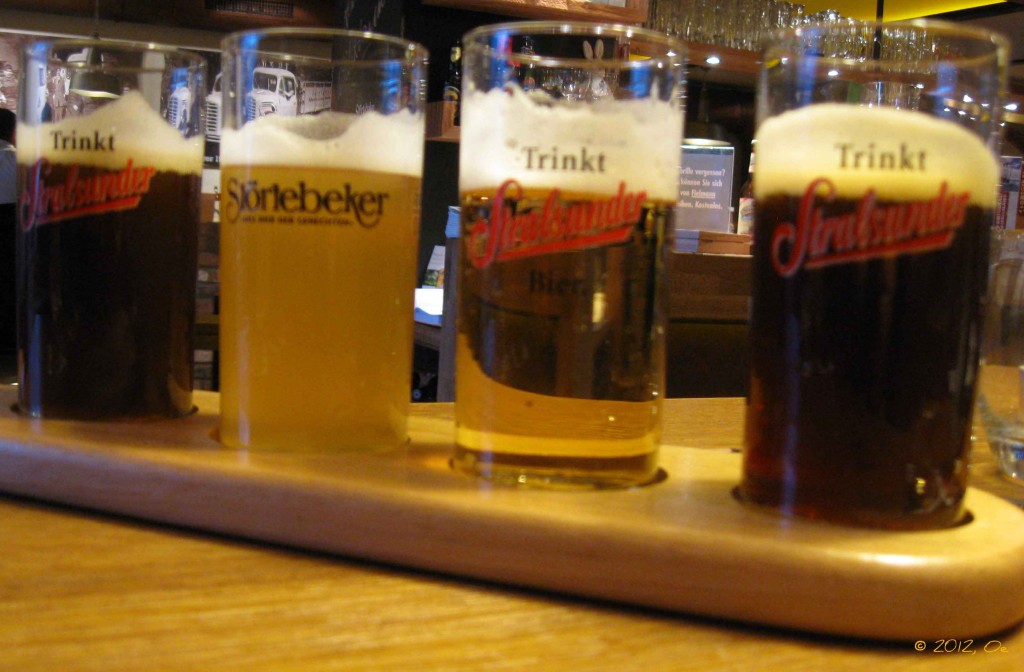