Easter Sunday has been a day spent in Cologne for several years now, as on Easter Monday morning (a bank holiday in Germany) the race „Rund um Koeln“ (Around Cologne) has been taking place for more than a century by now, namely since 1908 – lest those years in which weather (e.g. snow in 2008) or political circumstance (read: during WW I and at least the last years of WW II) weren’t permitting.

We have been taking part since 2009 as well – but with the caveat of the „weather permitting“ part. Which seemed to be an important caveat this year with April keeping all those promises German weather holds for this month: cold and rain and hail and snow and summery warmth and wind or storm and rain again. So far, it has mostly been a mixture of all of those parameters except for the summery warmth.

So, we kept ourselves warm when strolling along the cycle park today by food and drink (carbo loading = cake gobbling) and came across this very versatile bike (although not a very agile one, it seems) which actually is a coffee stand. 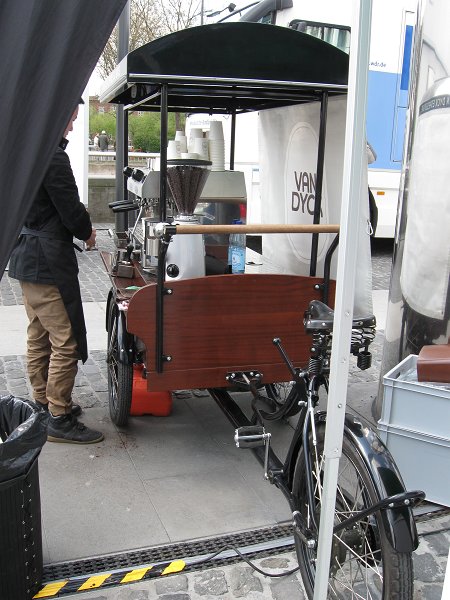 What a wonderful idea to be cycling while having the latte or espresso right at hand, any time you want it. Or need it. For warming up only, of course… 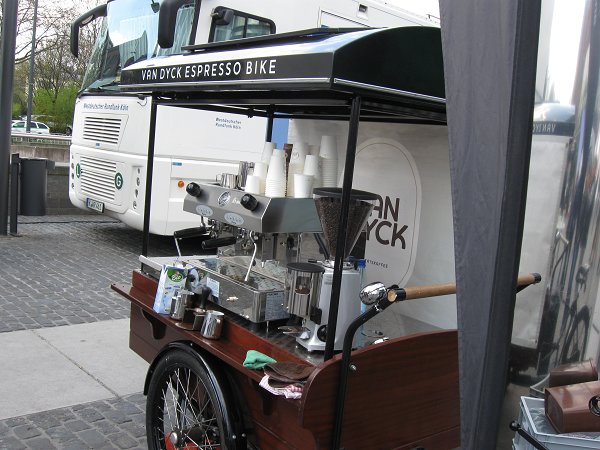 Don’t know what the WADA would say about it?
Guess, they would actually greenlight it as it should be hard to ride any kind of competitive speed with the thing, no matter how many cups of espresso you gulp while riding