Hi y’all – here is a little bit of information about myself and why I decided to start this blog. Just in case anyone may be interested in the person behind the voice (or rather: letters and typos):

I have been biking on a nearly daily basis for basically all my life, since the age of 5 when I snatched the hot red 24“ single speed (sic) of my older sister and … did not manage to ride like I had seen her do it. But my sis gave me lessons and I learned fast, within one afternoon (one of the lessons I learned on that day: Don’t trust your big sister when she reassures you of something, e.g. that she will be holding on to the bike rack so you cannot fall … she lied – then again: I did not fall since I only realized when I was already happily and steadily rolling along all by myself). Lesson #2: If you think somebody is doing anything for you just because you are such a nice person, think twice (my sister got a 26″ bike out of me having fallen in love with biking and her bike … and I was the proudest kid of the block when she handed her old one down to me then). So, my first bike looked very much like this one: 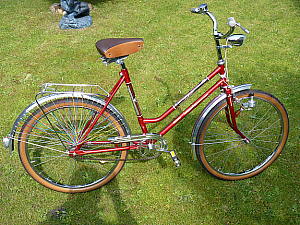 70s kid’s bike – looks very much like the one I learned bike riding on, but is taken from a www.kalaydo.de classified ad

Got hooked on my first road bike at age 10 when I absoultely had to have this particular 10-speed men’s bike which was way too big for me (I have always wondered, if my dad  finally gave in and bought it only because he figured that he would get to ride the thing often as well, which he did). It was heavy like hell, solid steel of course, frame shifters that shifted to whatever gear they wanted (not those I wanted to shift to) and it made me ache in several places that will not be described in more detail out of decency and respect of my younger self. But what can I say: My love of the red kid’s bike was fully transferred to the cool blue steel beauty, still.

Bikes came and went (or were stolen), but the love for the bike remained with me. Or rather: The love for biking (not yet for anything more than the actual activity).

I became a really addicted biker, though, while living in the San Francisco Bay Area for three years. There and then, I got introduced to mountain biking and, finally and ultimately, fell in deep love with road biking. Also, I started to realize that there was an interest and an appetite to learn about bike technology, bike repair, bike history, bike travel, weird bikes and strange and fun bike events (still have to giggle when my groping hand finds the dalmation print corsage in the back of my dresser, a thing I had bought and worn for the 1999 Cinderella Classic. 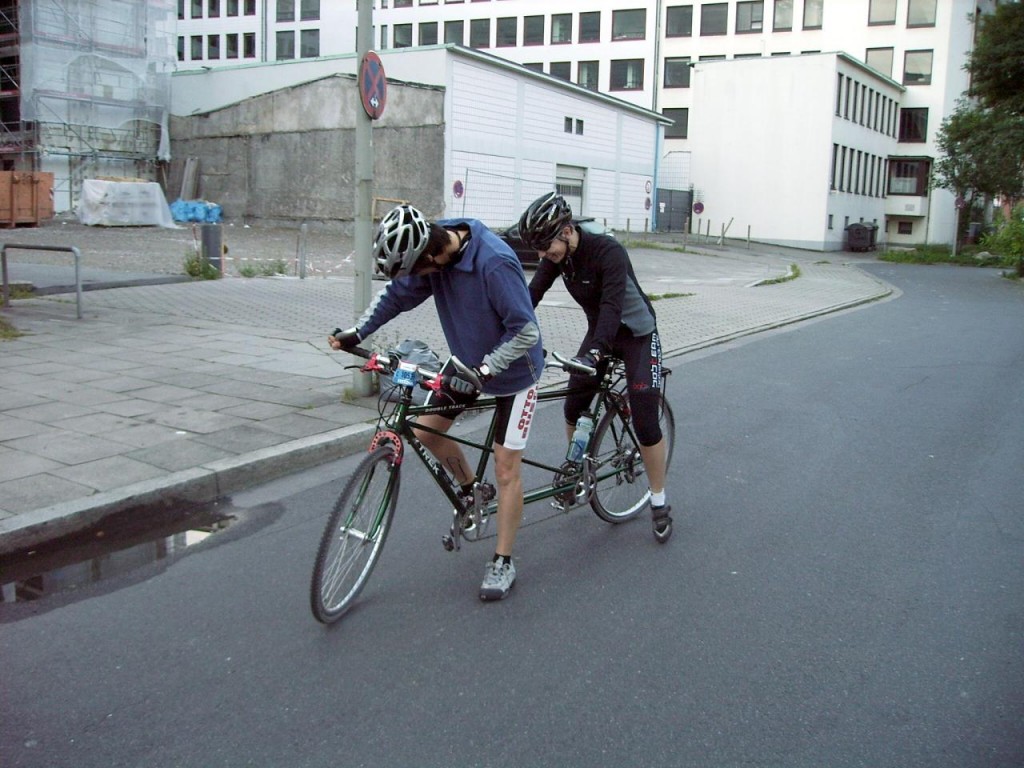 Trying to get a hang of riding the tandem together less than 1 hr prior to racing that thing in the Cyclassics (Hamburg, Germany, 2008)

The fleet has grown to 10 bikes (including a tandem) by now. But the more bikes I own, the harder it seems to keep my yearly milage up. Despite the fact that we have wonderful biking terrain around here where I live, in the Taunus hills North of Frankfurt/M., Germany. And despite at least one week of biking in one of the equally nice Southern European territories. 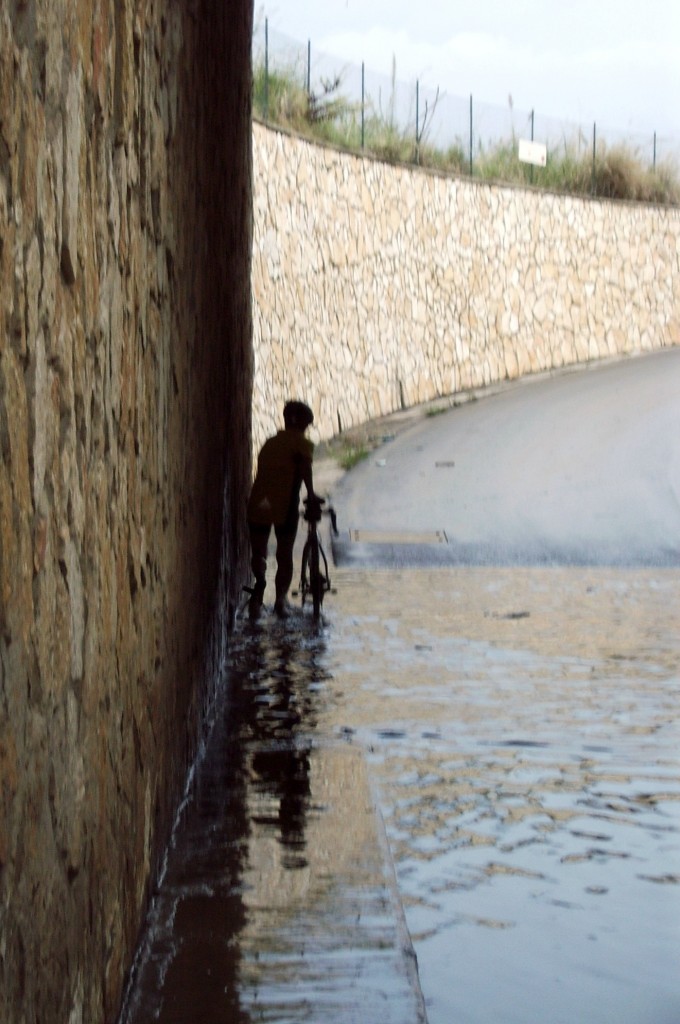 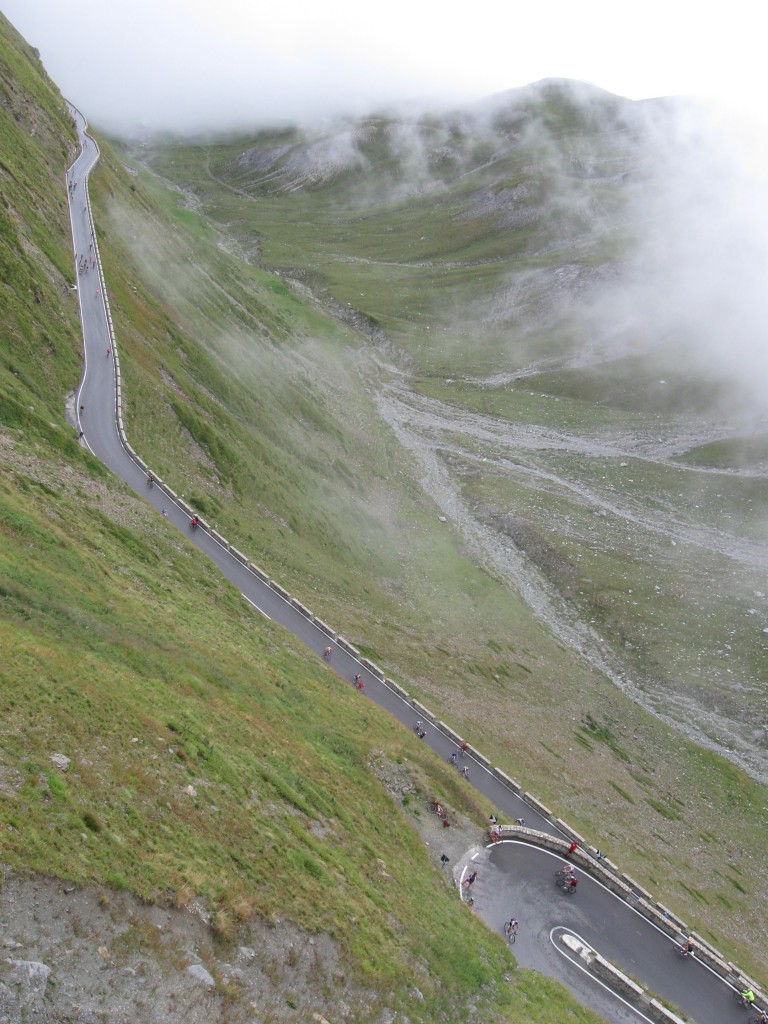 The things I see, the (sometimes rather random) thoughts I think during my bike trips and when I scan my world with a bike afficionado’s eyes, they are the base of the topics I write about in this blog. 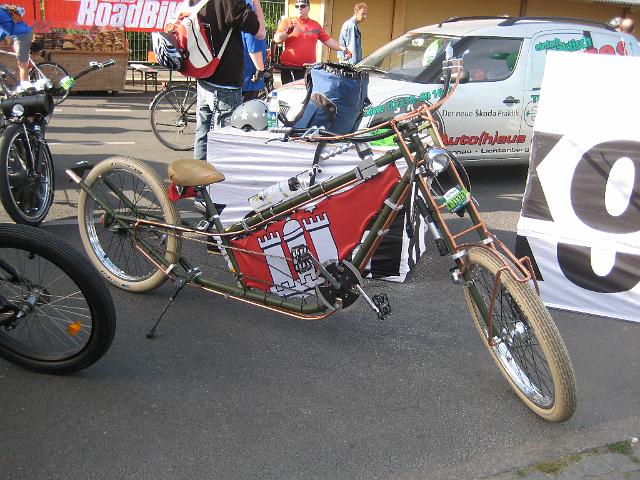 Hope I will be able to entertain you a bit with it, to to make your mouths water for comng over here to Germany and see for yourselves what things and roads and folks are like here. 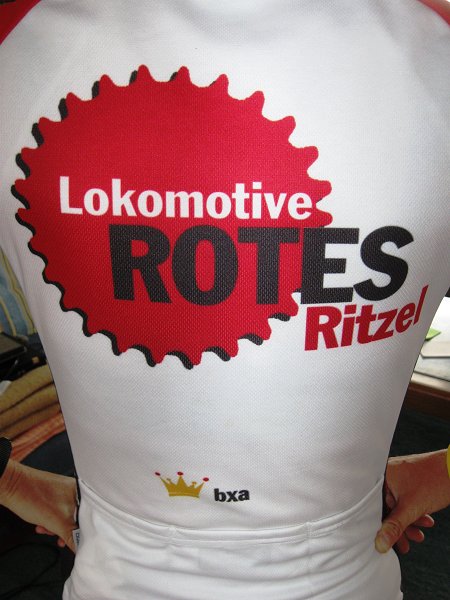